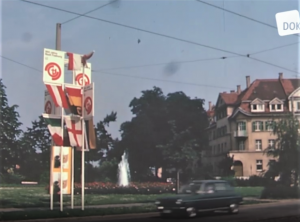 The Alemannic Week was part of the program of the 850th anniversary of Freiburg (Foto: LFS)

The color film was shot in 1970 for the 850th anniversary of the city of Freiburg by Helmut Eckert with a 16mm camera and accompanied by music ands commentary. It is part of his film for the city anniversary. One of the highlights was the "Alemannic Week", which is documented here. The first Alemannic Week took place in 1926 with a "series of lectures on culture and art" and was organized by the association "Badische Heimat e.V." until 1930. One wanted to build on this tradition. The four day event began on Monday June 8th and continued through Thursday June 11th. Originally a costume meeting was planned in Gengenbach in 1970, but it was postponed to the anniversary in Freiburg due to the large international costume meeting (see film: "Großer Umzug"). The then municipal director and dialect poet Karl Kurrus was commissioned to design the program. 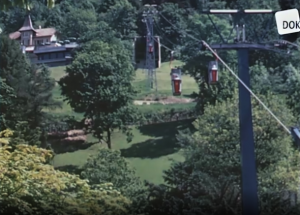 The film also offers impressions from Freiburg such as the Schlossbergbahn (Foto: LFS)

The film begins with the advertising poster for the Alemannic Week and then the 'opening'. The film shows the painting of Emperor Joseph II that hangs in the imperial hall of the historic department store. In front of it is an elaborate arrangement with steppe candles and ray chrysanthemums. After the guests of honor and dignitaries have been welcomed, the Alemannic Week will be started by Mayor Dr. Eugen Keidel opens. You can also see the writer Richard Gäng (Scheffel Prize winner 1952) - but neither of them with original sound. Instead, the singing of the Freiburg Children's Choir, which can be seen afterwards, is placed under the entire recording. Overall, the shots are too dark because the rooms could not be sufficiently illuminated by the filmmaker.

The film shows impressions from the city as well as information boards with the program for the anniversary week and the Schlossberg and Schauinsland cable cars. The pictures are underlaid with the song: "The Black Forest in Breisgau" by Johann Peter Hebel. The Schauinsland cable car still exists today in its former form, while the Schlossberg cable car was replaced by the Schlossberg cable car. In the next sequence, according to the title, Eckert shows the youth ball in the town hall on June 9, 1970. A six-member pop group is shown on the stage, the address of an unidentified gentleman and Lord Mayor Dr. Keidel and finally dancing couples who are festively dressed. Finally, a flag tower with the logo of the 850th anniversary celebration and various flags can be seen, including the Austrian flag for the twin city Innsbruck (twin city since 1963) and the Italian flag representing the city of Padua (twin city since 1967). The French flag cannot be seen on the material (Besançon has been a twin town since 1959). The red and white flag in the middle stands for Freiburg. The last shot shows Freiburg's banks of the Dreisam in beautiful summer weather. 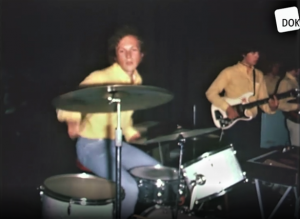 A dance evening with a beat band was offered at the youth ball (Foto: LFS)

Various program items of the Alemannic Week can not be recognized in the film. On Tuesday, June 9th, 1970, a poetry reading took place in the Kaisersaal under the motto "D Heimetsproch in Wort un Lied" ("The native language in words and songs"). The readings were all in Alemannic. Baden was represented by Hubert Baum, a Freiburg writer (Hebel prize 1970) and Gerhard Jung from Lörrach. Prof. Emile Storck from Guebwiler and the librarian Nathan Katz from Mulhouse came to Alsace. The writers Hermann Schneider-Herold and Albert Bächtold (Hebel prize 1964) from Zurich took part from Switzerland and Natalie Beer and Otto Borger from Austria. At the beginning of the evening it was particularly important for the organizer to read a quote from "The Guide" by Johann Peter Hebel, because he was not only a member of the Baden state parliament in Karlsruhe, but also dealt a lot with the Alemannic language and promoted the familiarity of the dialect his famous work "Alemannic Poems". The evening was accompanied musically with Alemannic songs by the Ensemble Vocal from Colmar. On Wednesday, June 10, 1970, at 8:00 pm, the theater in the Kolpinghaus gave the world premiere of Kurt Heynicke's play "Erasmus vom Stillen Winkel" by the Alemannische Bühne Freiburg. On Thursday, Prof. Dr. Bruno Boesch, the then rector of the University of Freiburg, finished the program with his lecture “Twice 850 Years of Alemannic”. He was accompanied by musicians from the Black Forest.

As the highlight of the 850th anniversary of the city of Freiburg, the Alemannic Week was a successful continuation of the "tradition disturbed in the past by political turmoil" that existed until 1930 for the speakers, guests and native speakers from France, Austria, Germany and Switzerland, as it was formulated in a letter from the organizers to Paris. On the invitation card, OB Keidel emphasized "that this event brings the people of the common language area closer together on the way to a peaceful Europe." It was a successful project to unite the four countries in order to exchange ideas about the Alemannic language and culture paved the way for a continuation of the traditional Alemannic week.