TitleN Easter 1941 / Title page of a newspaper 'Saloniki in German hands'; Driving picture from the train through snow-covered Black Forest landscape, locomotive; Woman with suitcase on path; Man looks out the window (below the Aha lido on Schluchsee); Cross-country skiing in the Black Forest, man and woman in a deck chair; The railway passes the Schluchsee; Walk around the Schluchsee; Sign 'Titisee Freiburg / St. Blasien Waldshut'; Walk in the area, soldiers on the country road; Farmer drags tree trunks with horse; Lunch in the restaurant. // 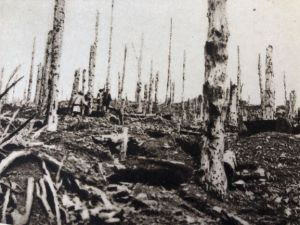 The silent black and white film, shot on 16 mm, documents a travel of Curt Balke and his family to occupied Alsace. The images show various locations and their sights and appear to be static overall. In Colmar he films the former main axis along the city (Grand Rue) and the Gothic Martinsmünster (Collégiale St-Martin), which was built between 1234 and 1375. From different perspectives he photographs the Koifhus and the square in front of this former customs house in the tanners' quarter (Place de l‘Ancienne Douane), with the Schwendi fountain (Fontaine Schwendi). The Koifhus represents the center of the city's economic power: on the ground floor there was a warehouse and the customs hall, on the first floor the conference rooms of the Colmar council of lay judges and the ten-city league (Tschirner 2011, p. 126). Balke pans to the former guild room of the Alsatian farmers.

Their journey takes them to Kaysersberg, a few kilometers away, where he takes in the town hall, the Catholic town church (Eglise Sainte-Croix) and the fountain with the figure of Emperor Constantine. This is followed by impressions of the city center with the colorfully painted house facades typical of Alsace. Women wash their laundry in the river of the Weiss. You can also see a stone bridge (Pont fortifié) from 1512 and the Oberhof Chapel (Notre-Dame du Scapulaire) built in the 14th century (Tschirner 2011, p. 251). The next stop is Hartmannsweiler and the Hartmannswillerkopf memorial, which was fiercely fought during the First World War (see film "Ostern 1942"). A plaque dates this visit to March 11, 1941. 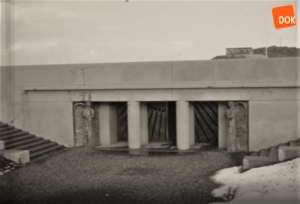 The following shots show Strasbourg with the cathedral and the nearby Johannes-Gutenberg-Platz with the eponymous statue in the middle of the square. The river Ill with the Wilhelmskirche in the background, the historical museum, the women's shelter museum (Musée de l'Œuvre-Notre-Dame) with art from the Middle Ages to 1681 and the opera house (Opéra national du Rhin) can also be seen. The next stop is Schlettstadt (Séléstadt) with the St. Fides parish church (Eglise Sainte-Foy) from the 12th century. You can also see the parish church of St. Georg (Eglise Saint-Georges) with its colorful ceramic tiles, the construction of which lasted from 1220 to the 15th century. Past a splendid private residence, called the officers' house, since the king's officer stayed there in the 17th century, one can see the New Tower (Tour Neuve), which forms part of the curtain wall, between the house facades of the city center (Séléstat Alsace Centrale 2014, p. 34). 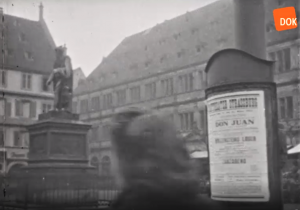 At Eastern 1941, a snowy weekend in mid-April, Curt Balke took his wife Käthe on a trip to the Schluchsee. They took the train and went to a boarding house near the beach Aha, which is the subject of some of his films. The two winter sports enthusiasts go on a tour on cross-country skis in the snow-covered winter landscape. They film each other while relaxing in a deck chair. On a sunny day they visit the community Schluchsee with the parish church St. Nikolaus. The film ends with shots of soldiers waving at the camera, as well as woodcutting work carried out by a man using a draft horse. The film fades out with the meal in an inn.

Curt Balke worked as an architect in Alsace from 1940 on the reconstruction of destroyed houses for the civil administration's building department (see film: "Wiederaufbau Elsass"). The Germans gave the previously evacuees an option to return to their Alsatian homeland, which two thirds of Alsatians did. The population living in Alsace was declared "ethnic Germans". Place names and first names were Germanized, books by French authors were burned, French radio stations, newspapers and associations were brought into line (Tschirner 2011, p. 46). At school, the German language became the main subject, the French language was not tolerated either for communication or as a foreign language. "You can only have one culture - that of language", so it was said in the 'Straßburger Neuesten Nachrichten' of December 12, 1940 (Wittmann 2009, p. 253). Between 1940 and 1944 Alsace was occupied by the German Wehrmacht. From autumn 1940 all groups of the NSDAP were represented in Alsace as part of the Nazification: Hitler Youth, Bund Deutscher Mädel; Reich Labor Service (compulsory six-month work assignment for young Alsatians from the beginning of 1941), German Women’s Association, SA, SS, National Socialist Motor Vehicle Corps (NSKK) and National Socialist Aviation Corps (NSFK) (Wittmann 2009, p. 256) Many Alsatians joined these organizations (see film: "Serment des NSKK au Korpsführer Hühnlei"). The Alsatian population was exposed to increasing surveillance by the Secret State Police (GESTAPO), the security service and other NSDAP branches.

Until August 1942, Alsatians were viewed by the Nazi regime as Germans living abroad with foreign citizenships. After the confiscation decree of August 24, 1942, with which about 130,000 young Alsatians were committed to the Wehrmacht (90% of them came to the Eastern Front), passive and active resistance in Alsace grew. On July 9, 1943, all Alsatians were declared German citizens (Wittmann 2009, p. 257). At the end of the war, a third of the Alsatian soldiers were killed or missing and 50,000 civilians had died.