This short sequence shows us the Breesé family and some friends enjoying a swim at the Baggersee lake in 1936.

Two boys in swimsuits with buoys. Several adults in back bathing from behind. General view from Baggersee with swimmers. The group from behind in a path leading to the lake. The mother in the water is holding on to a rope ; her little boy by her side in a buoy. The band on the beach then the feet in water. Several scenes of amusement in the water and scenes of bathing. A tanned couple on the beach smiling at the film-maker. A man takes a dip from a diving. A dip again. The band on a bark. A woman and a man swimming. Two men in water with a boy in his buoy.

The Baggersee, an attractive lake

The Baggersee pound, where this sequence is shot, is located in the city of Illkirch-Graffenstaden 5 kilometers from Strasbourg. Its name comes from Bagger, dredges, machines used to clean the bottom of a river, and See, the lake. Indeed, it is originally an old gravel pit, used between 1900 and 1905 for the embankment of the railway line Strasbourg-Kehl. Today still remains the hut of the digging site, now the clubhouse of the fishing association. In 1908, the public works contractor Charles Urban acquired this lake, abandoned the[1]n. This philanthropist let free access to bathers. But it was in 1929 that Mr. Schartner, owner of Strasbourg-Plage, had it converted into a real lake and leisure center, with "20,000 m2 of beach, a buffet-terrace for 1,500 people, a cloakroom and an undressing hall». Five years after this inauguration, Charles Urban exploited this bathing place that became very popular among the people of Strasbourg: at this period, which is when the extract shown here takes place, there are diving boards, canoes, a gymnastic beach, etc. It is even possible to make the German wheel, as can be seen on another sequence shot in this same place by Emile Breesé in 1938. Since 1962, the Baggersee is owned by the city of Strasbourg. 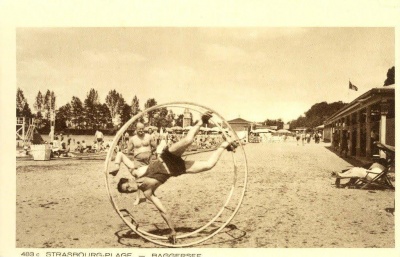 Recreation development: the outdoors near home

The year 1936 marks a turning point in the history of wage labor. It is the moment when the protest rises everywhere and where general strikes break out all over France (290 strikes in total in 1936). Among the advances made in the world of work in the 1930s, the Matignon agreements give employees fifteen days of paid leave. What to do with this brand new vacation? Some stay at home, others go to their families. Some spend their time in recreation such as sports or swimming. But according to Gilbert Breesé, his merchant parents worked a lot and benefited only exceptionally from this new right. So when the family was going to swim at Baggersee, it was always Sunday. This middle-class couple, relatively easy, had simple leisure like many other French during these times : swimming, picnic, walk in the forest or in the city. The period of holiday travels is still far away: if we refer to the images filmed by Emile Breesé between 1930 and 1950, this family has traveled little (Alsace, Lorraine or Germany). These bathing images are recurrent in amateur films of MIRA collection, already as early as 1932: swimming scenes in Biarritz (Daussin collection, see 0093FN0007) or Baggersee as here or later (Trau collection, see 0040FN0016, 1940), in public pools already in 1938 (Willer collection, 0020FH0019 in Bellefosse) and especially in the 50s, then in garden pools around 1970 (Ehret collection, see 0087NN0003). And of course, swimming in the wild, in streams, ponds or at the sea is common to all these decades. These scenes reflect each time a childish joy and summer, a time of relaxation and sharing around the water. They are rarely those of accomplished athletes as we see here.

Towards the democratization of swimming

Indeed, in this sequence, we can distinguish two types of bathers. First of all, the Breesé family, whose members do not seem to know how to swim. The two children, Gilbert and René, then about ten years old, paddle with a buoy, but do not seem to be in a moment of learning, except in a very short sequence where one of the children is pulled by a man. At the same time, a woman goes swimming, always using a buoy. We can see however that some men swim in the background. In 2017, the Health Watch Institute indicates that 62% of French women born between 1932 and 1943 can’t swim, compared to 35% of men born in the same period . Their unidentified, visibly muscular, pair friends, on the contrary, seems accustomed to this discipline: they master the art of diving and progress with ease in the water.

In theory, swimming has been compulsory at school since 1879 in order to keep children in shape but also to make them complete future soldiers. During the 19th century, learning to swim was multifaceted: both hygienist and practical. Lifeguard learning is based on military education and includes demonstrating movements out of the water. This practice has continued for a long time: in the MIRA collections, the first training sequence of swimming with a lifeguard dates from the 1950s (Nemett fonds, see 0059FS0001). We see children doing swimming first on the ground under the supervision of a lifeguard, then the latter guides them in the water with a pole in an open pool. Moreover, at this time, the methods of learning swimming evolve: the creation of the High Commission for Youth and Sports led by Maurice Herzog in 1958 aims to train athletes, among others. The learning of so-called modern swimming at school is launched: one of the reference books is The teaching of swimming by Raymond Catteau and Gérard Garrof, published in 1968. In parallel, the construction of swimming pools full air, which began in the inter-war period, continued in France until the 1980s, when the idea of ​​learning to swim as a competition began to disappear at school.

A new relationship to the body: tanning

The sequence is interesting here for another reason: this very sporty couple seems adept at practicing tanning and it detonates among these bathers and their families. Wives and mothers, like Madame Breesé, are rather pale, although we can see on some bathers in the background an early state of tanning. 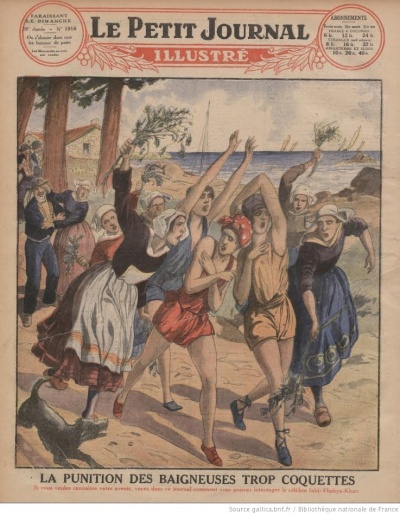 The tan appears as a practice in the late 1920s (sometimes generating debates as in Vogue in 1928) and spreads as early as the 1930s. It gained its acclaim from 1945 with the rise of heliotherapy in the medical field, and more broadly in the context of a new relationship to nature, to sport, to holidays. The tan becomes a choice and no longer the consequence of an exhibition undergone characterizing the workers of the earth, the convicts, the soldiers. For Christophe Granger, whose vision is more politicized, the development of tanning is linked to the use of the body by the liberal middle class as social capital allowing them to differentiate themselves through the natural and sculptural, in opposition to the maintenance and the rigidity of the old ruling classes, with pallor as a beauty canon. This description corresponds quite to the pair of our sequence, whose postures and appearance are very natural. For example, while Madame Breesé's hair is well set and most bathers wear bathing cap, this tanned woman wears a simple headband and does not seem to be particularly careful about her hairstyle. Her silhouette and her port also seems different from those of other women, "more modern", likewise are the young men that can be seen at the top of the diving board.

Pascal Ory detects in this evolution a form of right to happiness and emancipation process, especially feminine. Thus, the body of the woman is discovered over these changes in practice: the swimsuit is more revealing in the 1930s, close to the male bathing suit as worn by Madame Breesé and many other bathers here. In 1930, the brand Jantzen created the bathing suit "Shouldaire" which reveals the shoulders to fully enjoy the virtues of sunbathing. This is another difference that we note between this pair of bronzed and sporty and most other swimmers: the outfit. While most women filmed here have the same bathing suit, the woman wears a much more colorful and revealing swimsuit. This emancipation is sometimes not seamlessly in this moralizing France, especially in the villages. During the Crisis of February 6th 1934 in Paris, one can read on the protest of the fathers of families: “We do not therefore tolerate that the beaches are disgraced by exhibitions and dirty games, which sometimes constitute real public attacks to the decency”. At Baggersee it would have been rather amusing, as evidenced by a 1931 text: "It was the time when young and old, men and women in the same "communion" for the beautiful sport, pell-mell, undressed in the shade of twigs scattered here and there, behind the few branches of shrubs etiques, where in the shelter of a handkerchief, tiny screen stretched by a friendly hand ... and discreet. »

Women's magazines, of which one of the women filmed on the boat holds a copy, begin their injunctions to perfection and boast self-tanning products. Thus appears the Chaldea oil of Jean Patou in 1927, "the first sun oil that protects the skin and reduces sunburns." In 1935, Schueller's Solar Amber is supposed to allow tanning without burning. The Breesé are no exception: in a family bathing sequence dating back to 1938, Madame Breesé, still in Baggersee, is seen coating her two sons with a solar oil.