Deportation of the Jewish population from Bruchsal on October 18, 1940.

On October 22, 1940, the majority of Baden's Jewish population was deported to the Gurs camp in southern France. This was preceded by increasing exclusion and discrimination and quasi expropriation of businesses and companies at prices well below the market value, which the Nazis called 'Aryanization'. Lahrer Ernst Feist, member of the supervisory board of the tobacco factory Roth-Händle AG, described in a letter in 1945 how such expropriation took place: “On April 7, 1938, the Jewish shareholders of the Baden tobacco manufacturer Roth-Händle AG had to take measures taken by the government at that time (...) Sell 80% of their shares at par to Mr. Franz Neusch (cigar factory Joh. Neusch) in Herbolzheim ”(Stude 1997, p. 162).

In Offenburg there were 16 Jewish companies in October 1938, and 10 in the district that were to be expropriated by the German Labor Front. The exclusion already began in the spring of 1933 through the open boycott of Jewish shops, as was documented in film in Lahr. In March 1933, the town council of the city of Offenburg no longer considered Jewish companies, department stores and branches as suppliers. The same was true for Jewish doctors or lawyers. The targeted displacement of Jewish civil servants from the civil service took place, and even in clubs they were increasingly undesirable and were excluded. Jewish schoolchildren felt the disregard of their classmates with anti-Semitic teasing in the schools. The Reich Association of Jews in Germany, founded in 1935, organized schools and training centers for Jewish children. “The speed with which exclusion and isolation took place in villages and small towns depended on the level of pressure from local anti-Semitic propaganda, militant actions and social control. There were also great differences between the villages as to how aggressively the Jewish population was acted on ”(Landeszentrale, p. 9). In September 1935, the 'Law for the Protection of German Blood and German Honor' was promulgated at the Nuremberg Party Congress, prohibiting marriages and relationships between Jews and non-Jews as 'racial shame'. Clementine Neu from Offenbach reported: “The hatred of the Jews is sharpened every day and the necessary living conditions are hardly given anymore. Civil servants and everyone who is maintained by the state should and may no longer buy anything from the Jews ”(Ruch 1998, p. 121). Posters and banners increasingly appeared on 'Jews undesirable', 'Jews are not served here', 'only for Aryans'. The Jewish population was also mocked on moves in the Fasnet, such as in March 1938 in Nussbach or 1939 in Lahr (Fasn growth train, LFS 246). Anyone who met Jews privately or on business suspected himself, and courage was part of resisting it. At the pogrom on 10/11. November 1938, the interiors of numerous synagogues, Jewish shops and apartments were also destroyed in Baden. The Jewish population had to reimburse all costs incurred in the pogrom amounting to 1 million Reichsmarks. Younger Jews in particular had emigrated before, often to Palestine, which was still controlled by the British; agricultural knowledge was required for entry. But such a decision was not an easy one, because ties with Germany - some had fought for their fatherland in the First World War - and concerns about their professional future abroad prevented them from doing so. But after the pogrom, anyone who could afford it financially and obtained an entry visa left his home. 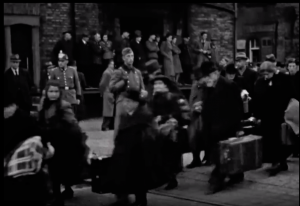 The deportation of the remaining Jews at the Jewish Feast of Tabernacles on October 22, 1940 was the next step for the National Socialists to exclude this population from German society. There are only a few photographic documents from this 'Action 6504' such as: B. from Kippenheim, Lörrach and Gailingen. But the film recordings from Bruchsal are an outstanding historical document and unique for this region. The fragment of a good minute in length begins with a tablet: “Bruchsal is free of Jews! The last Jews leave Bruchsal. October 18, 1940 ". There are five shots in a half shot with a tripod. A column of old men and women in dark coats, as well as some teenagers, are walking across the cobbled street with suitcases and bags in hand. They are monitored by German soldiers in uniform and by police officers. They cross tracks. A man pulls a handcart with luggage. The deportation took place before the eyes of the population, but the majority remained silent. Railway official Josef Doll remembers the events at Bruchsal station: “They pushed them down the stairs, jostled them and spat on them. They were Bruchsal SA men in uniform. I particularly remember how Dr. Schmitt was spit on. This Jewish doctor was so respected in Bruchsal and had treated many poor people free of charge ”(Stude 2005, p. 5). 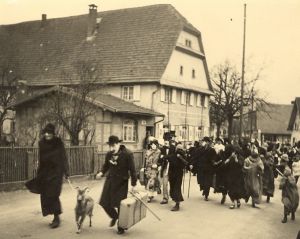 The deportation was preceded by the exclusion of the Jewish population as in the carnival parade in Nussbach in 1938 (Foto: Ortsarchiv Nußbach)

In October 1940 a total of 5,600 Jews from 137 communities in Baden were expelled, 2,000 from Mannheim alone and 905 from Karlsruhe. They were allowed to take 100 Reichsmarks and 50 kg of luggage with them. An exception to the deportation were 820 Jews in Baden who lived in 'mixed marriages', foreign 'non-Aryans' or disabled people and their carers. They were deported directly to extermination camps in 1941. The trains crossed the Rhine at Neuenburg. The goal was the “Camp de Gurs” in western southern France in the foothills of the Pyrenees, which was controlled by the French Vichy government until November 1942. This also passed anti-Jewish laws in October 1940, which allowed internment in Gurs. The train journey there took a total of three days and four nights. The camp was not an extermination camp. Some succeeded in fleeing or even legally leaving e.g. in the USA. Those who failed to do so were transported to the extermination camps in Eastern Europe from 1942, where most died. Of the 8,000 Jews who had lived in Baden in 1925, just 40 had returned to their homeland in 1947.