Fire brigade exercise in Bruchsal at the parc of the 'Spatzentower' near the central station. Presentation of new fire extinguishers

These recordings are probably the 80th anniversary of the Bruchsal volunteer fire brigade, which was founded in 1854. At that time it became clear that comprehensive protection in the event of fire was necessary. At their anniversary in 1934, the firefighters officially appeared for the last time in their traditional uniforms with brass helmets, which can be clearly seen in the film. At the beginning of the 1930s, the volunteer fire department had four companies, each with climbing and spraying teams, and 20 men in the so-called 'alarm line'. In total, the fire brigade in Bruchsal comprised 220 men. Women only got their hands on it during the Second World War. It was headed by an 18-member board of directors. The 'alarm clock line' was a modern alarm system from Siemens & Halske, which was installed in Bruchsal in 1908 for 20 firefighters. They could be notified directly and were therefore the 'spearhead' of the fire brigade and also active in the neighboring communities. In 1933, however, the equipment of the active team was more reminiscent of the imperial era: “The officers sometimes presented themselves with pimple hoods and sabers on public occasions in their uniforms hung with medals. Otherwise the officers wore nickel-plated helmets. The teams, on the other hand, wore brass helmets and hatchets on their belts, while officers only carried a dummy hatchet” (Huber, p. 68). The film was created in the upheaval situation because the active firefighters are already wearing the new uniforms. 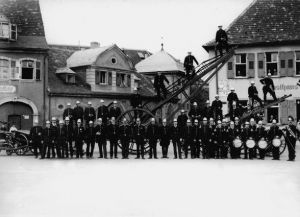 For their 80th anniversary in 1934, the firefighters wore traditional uniforms with brass helmets for the last time (Archiv Huber) 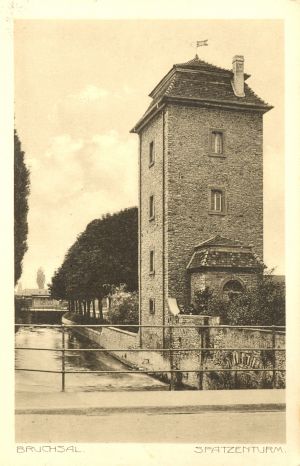 Demonstration of climbing and spraying teams

The slightly underexposed and therefore often too dark four-minute film first shows the 15-man marching band under drum major Ludwig Kretzler; there was also a fire brigade band with 17 men. In the next half-total shot, a fireman climbs an extended aerial ladder and unfolds a swastika flag at the top. His colleagues marched down below, wearing bright helmets. The 16 mm camera follows him ascending. The commander with military medals on his chest gives a speech. A company marches into the square with two aerial ladders in new uniforms. In the next settings, there are several turntable ladders next to each other on the square. In the background the 'Spatzenturm' (Sparrowtower) can be seen, which served as a water tower from 1721 on. Then the hoses are rolled out and the firefighters march in formation. The spray teams connect the hoses. Others set up five ladders, which are then extended, climbed and overtaken. Next, the spraying teams show off their skills, the water splashes out of ten hoses like a cascade into the sky. The cameraman is really looking for good settings. Boys paw through the puddles. Then the NSDAP makes its big appearance. Their representatives come in an open Mercedes limousine, and accompanied by two men, the head in SA uniform delivers a dedicated speech. His right fist is clenched, and from the gestures it can be concluded that he is roaring across the square, because he occasionally stretches his fist upwards. During the speech, the cameraman changes his position. The fire department commander stands next to him. Finally, the state representative says goodbye with a quick Hitler salute. The final picture shows firefighters marching from left to right with their brass helmets. The house in the background is decorated with swastika flags. 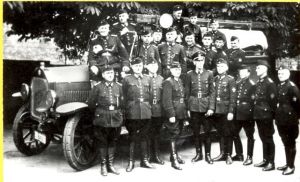 Firefighters in new uniforms with boats after 1935 (Stadtarchiv Bruchsal)

Firefighters are placed under the police

After the change of power, the National Socialists abolished the independence of the fire brigades. “This new legal regulation made it uniform across the Reich that all elections in the fire brigades were abolished and the most fundamental principle of the National Socialist worldview, namely the leader principle, was introduced into the fire brigade organization. In addition, the fire department had to report to the local police administrator and thus to the police supervisory authorities. All in all, this meant the beginning of the state patronage of the fire brigade ”(Huber, p. 69). It was exacerbated by the 'Law on Fire Extinguishing' from November 23, 1938, whereby they were renamed into the 'Fire Extinguishing Police'. When the Bruchsal synagogue burned on November 10, 1938, the fire brigade was on site, but it did not extinguish the burning Jewish church, but only protected the neighboring houses against the spread of the flames. "For the Bruchsal fire brigade, it was really the darkest days in its history back in November 1938" (Huber, p. 74). At the end of the 1930s, the confiscated former iron warehouse of the Schlossberger Jewish family was used by the fire service as a tool shed and a hose washing system was installed. During the Second World War, the Bruchsal fire brigade was regularly called up for large-scale operations in Philippsburg, Karlsruhe, Mannheim and Pforzheim after bombing. In 1943 women were hired as helpers and trained for fire service for the first time since many of the firemen were drafted into military service. In an attack by the 8th US Air Force on March 1, 1945, 894 explosive bombs and 50,000 stick fire bombs were dropped and 80% of Bruchsal destroyed (Huber, p. 86). Over 1,000 people died, including 20 firefighters. Bruchsal burned for several days, the inferno could not be extinguished due to the lack of intact water pipes.