Mardi Gras: children in Mardi Gras costumes in the apartment and on the street; Carnival parade through the war-torn Freiburg; Children with sledges on the street; Newspaper 'Happy Easter 1949'; flowering fruit trees, girl with hair bow in the garden; Hike in the Black Forest: Gasthof 'Todtnauerhütte'; Children are looking for Easter eggs, a man with leather pants and a camera, a girl with a harmonica; Title: Pentecost 1949 / Grandmother with children on the street, bus ride, hike in the rain, inn; Ride with cable car; passing train; Playing with a model ship on a pond, hiking in the Black Forest, girl drinking from a bottle, resting on a bench, children playing with a cat, girl picking flowers; Grandfather with girl on bike; Girl harvests raspberries, Freiburg in the background; Grandfather with children on bike; Family in the swimming pool: carousel, swing, lawn; Children on the bank of a lake, boys with model ships; Girls in the house and in the garden; Title: 11.9.1949 / Ride on the cable car up to the Schauinsland, walk on the Schauinsland, girl with calf, boy eats apple, children on blanket; Children in the garden and on the street, man with motorcycle; Title: Peter and Gisela before leaving for Chile / October 6, 1949 // 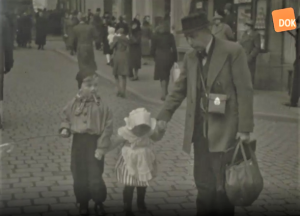 Curt Balke with his grandchildren at the parade (Foto: LFS)

The Fasnet parade in Freiburg in 1949 takes place between ruins and is the focus of the film. The silent black and white shots in 16mm format and 45 seconds long come from the architect Curt Balke, who from 1928 documented his family life and especially his daughter, his travels and excursions on film. Curt Balke can often be seen in front of the camera himself, so it must have been filmed by someone else. Many of his recordings are of historical significance, such as the carnival parade through the destroyed Freiburg in 1949. His films are invaluable because they document everyday life and family life in a middle-class society in the first half of the 20th century.

Because of the Second World War, no carnival parade was held between 1940 and 1946. Only after the approval of the French military government was Fasnet celebrated again in Gottenheim in 1947. This was probably the first carnival parade with performances of carnival games in the region after the war. In 1949 the Gottemer Krutstorze also took part in the first post-war parade of the Fasnet in Freiburg. This move ran from the Mösle Stadium into the city center through Schützenallee, past the 'Old Messplatz' and the old Maria-Hilf-Kirche. In the images of the move, the raised Schwabentor and the cathedral can be clearly seen. 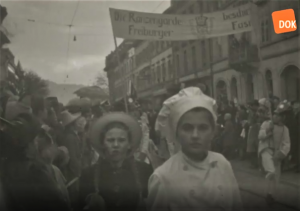 The banner of the Freiburg satchel guard is clearly visible (Foto: LFS)

The first sequence shows the two grandchildren dressed as a Dutch couple with their mother and Curt Balke, first in front of his house and then in front of the Martinstor in the city center. This first move is of particular importance to people. One can clearly see a banner "Die Ranzengarde Freiburg", which was founded in 1858. According to old tradition, the Ranzengarde moves through the town at the very front of the parade, as it was the case in 1949. Ten years of war and emergency had forbidden any activity of the Ranzengarde. Many of the satchel guards did not return home from the war. When the French garrison again allowed a foolish parade for Fasnet in 1949, only umbrellas were allowed instead of rifles. So you can see the satchel guard in the recordings 'shielded' and without a mask. In 1949 all in all 39 active contributors were recorded. Typical carnival uniforms can be seen in the film, which caricatured French Napoleonic uniforms in the 19th century. 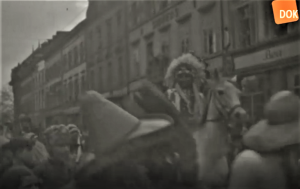 A popular motif among young and old were costums of Indians and cowboys (Foto: LFS)

The Zunft der Fasnetrufer e.V. Freiburg, which was founded in 1934, is part of the move. Her costum (Häs) is made of colorful heart-shaped spots and her wooden mask was designed by Franz Spiegelhalter in 1936. They also wear a leather belt that shows the Freiburg seal of the "free castle", as you can see in the film. It follows costumed Indians with feather headdress. The chief rides a white horse. Many of the children are also dressed as Indians and cowboys. This topic became very popular through Karl May's Winnetou novels, which achieved very high editions and led to a general interest in Indian culture in Germany. The group 'shirt glunkers' wear a white nightgown ride along on a car. The "Schnogedätscher", who were founded in 1934 as "Gartenhagpfuser" and were renamed in 1948, took part in the parade, but did not appear in the film The cat guild was also present at this carnival parade in 1949. They can be recognized by their wooden cat's head masks. The cat costume consists of 12 to 15 cat skins that are made into a jacket. 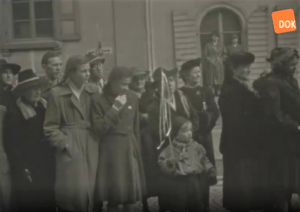 You can tell from the audience that these are difficult times (Foto: LFS)

After half a minute the ruins of Freiburg's old town can be seen around the cathedral, which is a clear contrast to the exuberant atmosphere of the carnival. The film documentation of the 1949 Fasnet parade in Freiburg is of great historical importance and the recordings are priceless. 1939 was the last carnival before the Second World War. The guild was reorganized as early as 1947. The basic structure of the Breisgauer Narrenzunft (BNZ) and the procedure of the Freiburg Fasnet have changed constantly since the 1930s. The carnival motto is still proclaimed on November 11th, when fools, politics and the press pick up the fool's light, but the actual carnival in Freiburg, as everywhere in the southwest, does not begin until after Dreikönig. To this day, cap meetings and hall events with hand-made speeches are an important element of the Freiburg Carnival. However, some customs have also changed. The traditional fool call “Helau”, which was originally in Freiburg, was replaced by “Narri-Narro” in 1975. This was a commitment to the Alemannic carnival instead of the Rhenish carnival in Mainz. Meanwhile, the Freiburg Fasnet mixes carnival traditions with the Alemannic Fasnet, which clearly dominates. An important meeting point for all Freiburg jesters is their guild room at the town hall, where the Freiburg Carnival Museum is located, where the history of the carnival and the guilds is presented.