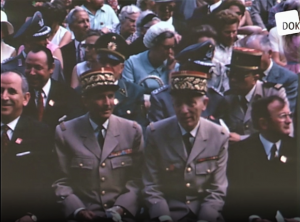 The guests of honor also include French military personnel from their Freiburg base (Foto: LFS)

In 1970 the city of Freiburg celebrates its founding 850 years ago with a city anniversary. Alongside other filmmakers, Helmut Eckert records the events and celebrations around the anniversary in his amateur film "850 Years of Freiburg". The recordings are in color, in 16mm film format and are set to music. Sometimes a tripod is used so as not to blur the images. The media interest in the move is great, as numerous photographers and filmmakers underline.

This excerpt from the anniversary film focuses on the large parade of the Alemannic costume associations and the Badisch-Hessian vigilante groups, which took place on June 7, 1970 from 2.30 p.m. Eckert does not record the original sound, but adds brass or marching music to the scenes and comments on the events - a customary, albeit complex, design option at the time. Most amateur films therefore do without sound. Eckert tries to show the events as completely as possible from different perspectives. Before the move begins, Eckert pans over the grandstand and begins with two high-ranking French soldiers in uniform. They belong to the Forces Françaises en Allemagne (FFA) and are stationed at Base Aérienne 253, the Freiburg airfield. The weather on this Sunday is overcast, but it is around 20 ° degrees. In parallel to the music, Eckert reports that 3,500 active people take part in the parade and a total of twenty minstrels, fanfare and music parades. The Lord Mayor of Freiburg, Dr. Eugen Keidel welcomes guests of honor in front of the Colombi Hotel, where the grandstand is set up with the guests of honor; his wife Claire takes a seat next to him. Members of the vigilante groups greet the guests of honor. 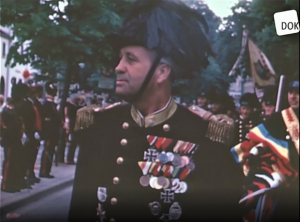 A veteran of the citizen brigade with his chest full of medals (Foto: LFS)

Dr. Eugen Keidel was a member of the SPD and was in office for twenty years from 1962 until his retirement in 1982, which has shaped Freiburg. The most important measures include the expansion of Freiburg through the construction of further districts and the incorporation of several localities as well as the establishment of the Eugen-Keidel-Bad and a pedestrian zone as one of the first in the country. His motto was: "Make Freiburg modern and keep it lovable". 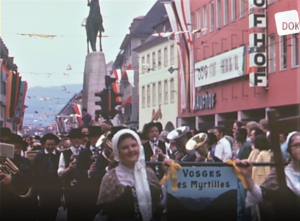 A group of costumes from Alsace at the Bertoldsbrunnen (Foto: LFS)

A look at the crowd shows that the guests are wearing red and white badges on the occasion of the anniversary, which was, so to speak, the ticket for the festival week. Young people hand out red and white anniversary flags to wave to the onlookers on the roadside. Large red and white flags fly in the background. The color scheme is based on the city coat of arms, which has shown a red cross on a white background since the early 16th century. Eckert is right in the middle of the action and chooses between long and close-up shots for the film. The vigilante groups, some of which are mounted, are armed citizens of a place who traditionally banded together to protect their place against attacks. The corresponding associations still exist today, but they no longer have the protective function and are struggling with dwindling membership numbers. The state association of vigilante groups and militias Baden-Südhessen participates in large numbers, including highly decorated senior veterans. In addition, the hierarchical structures within the train are clearly visible. There are historical vigilante groups and militias in Baden-Südhessen, which wear different uniforms, in addition to Freiburg and Karlsruhe in around twenty locations.

At the time of the anniversary celebrations, wearing traditional costumes is experiencing a new upswing. The Bollenhut worn by some clubs, which was actually reserved for a certain valley in the Black Forest, is still an important part of marketing for the Black Forest today. In addition to the vigilante groups, groups of costume and traditional costumes accompany the move. The Groupe Folklorique des Vosges et des Myrtilles-Saint-Dié-Corcieux is represented from Alsace. The groups perform dances, wave flags and play folk music. The four in hand of a brewery should not be missing either. Eckert changes his location from the Colombi Hotel to the Martinstor and to the Bertoldsbrunnen. Finally, he is on Rathausplatz and films the carillon at the top of the New Town Hall, including the original sound recording and the exterior facade of the Old Town Hall.

As early as 1965, the decision to celebrate the city anniversary was made at a department meeting and a festival committee was founded. In the minutes of a preparatory meeting of June 7th, 1969, the city plans funds of 20,000 DM. The Freiburg vigilante received 12,000 DM for holding the national meeting of vigilante groups. Before the anniversary, a “small anniversary chronicle” with the city's history appeared in the Freiburg weekly report. Freiburg was founded in 1120 by Duke Konrad. In 1146 a church is mentioned for the first time in place of the later minster, which was built between 1200 and 1513. As early as 1326 there were first Freiburg coins, the so-called black pennies. For the city's jubilee in 1970, postage stamps of the Federal Post Office were issued in addition to a coin. They have a circulation of 30 million pieces. The population fluctuated greatly, mainly due to the plague and war. In 1934 Freiburg reached over 100,000 inhabitants for the first time. At the 850th anniversary in 1970, around 170,000 people lived in Freiburg, now there are over 230,000.