Excursion to the Hartmannsweilerkopf and visit of the daughter at Dornier on Lake Constance.

Parade of soldiers after the French campaign in Freiburg, banner above the street 'Freiburg welcomes its brave soldiers', greeting the soldiers with flowers;

Family in a room and in the garden; Man in Wehrmacht uniform drives in an open horse carriage from the farm 'Gut Lignitz (Insel Rügen)'; Walk (dark); Garden of the manor; Woman with toddler in the yard); old woman in tree top; Rabbit hutch; Children with hoe; Candles on the Christmas tree; Girl at the paddock (dark); Country road probably on Rügen; Man on horse; Manor, manor house Gut Lignitz, animals on the farm, adjacent fields, interiors; Clinic building.// 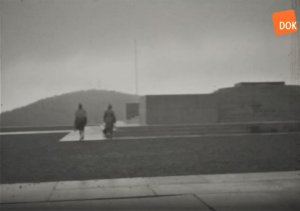 Visit to the Hartmannswillerkopf memorial in Alsace (Foto: LFS)

The silent black-and-white film, shot on 16mm by the private filmmaker Curt Balke, documents events from 1942/1943. It begins with a visit to the Hartmannswillerkopf memorial in Alsace, the trip to see daughter Kati on Lake Constance and her visit with her fiancé in Freiburg. This is followed by an excursion to Constance and a ride on the Bregenz Pfänderbahn as well as further excursions during the fourth war Christmas in 1942/43. This film was made out of purely private interest. A public performance was subject to censorship and it was forbidden, for example, to record streets and houses destroyed by the war (Keilbach et al. 2014, p. 42). In view of the scarcity of raw films, the Association of German Film Amateurs recommended in 1942 to limit oneself to family recordings. After recreational trips prospered until the war winter 1940/41, they came to a standstill in 1942, because front vacationers, those seriously injured in the war and employees of war-important companies should be given preferential accommodation. The length of accommodation was limited by the state to three weeks per year and controlled by the state. In March 1942, the food rations, especially for bread, fat and later vegetables, were reduced. In the winter of 1942/43 there was also a shortage of heating materials and after the lost battle of Stalingrad the supply situation generally deteriorated (Boll 1996, p. 427). In spite of this, Curt Balke shows a happy family idyll in his films, the war and its effects are not discussed. 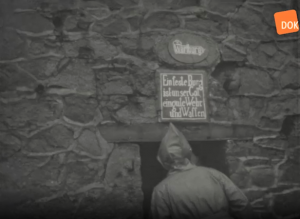 The first excursion destination took the Balke family on a rainy day to the national monument of the Hartmannswillerkopf (French: Vieil Armand) in the Vosges between Colmar and Belfort. This strategically important hilltop was hotly contested in the First World War. About 30,000 French and Germans died. During the four years of the war, control of the two war opponents changed four times. The memorial commemorates the fallen soldiers and was built by the French shortly after the First World War in 1918 with a crypt and a large military cemetery (Wirth 1973, p. 21). In Balke's film, German signs can be seen, which were probably put up from 1940 to take over the French memorial site. The sightseeing tour takes the Balkes into the trenches that are around 60 kilometers long and around 600 bunkers, as well as into the underground shelters. German soldiers entrenched themselves in bunkers, the building material of which was transported to the top of the mountain by cable car, while the French soldiers built log houses for protection. Especially in winter the conditions were terrible. The soldiers stood knee-deep in the trench swamp, a stinking mixture of water, urine, feces, remains of ammunition and body parts. Diseases such as dysentery, cholera and typhus spread (Wirth 1973, p. 21). On the lookout rock with the white summit cross, the Balkes can overlook the Rhine Valley. Then they pass the memorial to the 152nd French Infantry Regiment. Below is the 'Wartburg' shelter, to which the camera pans when entering. With around 250,000 visitors per year, the Hartmannswillerkopf is now one of the tourist destinations in Alsace with the highest number of visitors. At the end of 2017, French President Emmanuel Macron and Federal President Frank Walter Steinmeier opened the Franco-German Museum there, a symbol of the rapprochement between the two states after the Second World War. 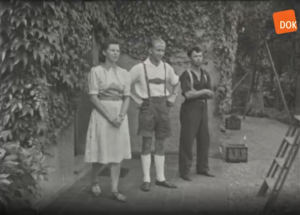 Kati Balke and her fiancé watch a bee's nest being fumigated (Foto: LFS)

The chalk inscription on a wooden beam “1912 to 1942” commemorates the Balkes' 30th wedding anniversary. A handwritten sheet of paper provides information about the visit of her daughter Kati on June 28, 1942, who at the age of 22 worked for the Dornier factory in aircraft manufacturing on Lake Constance. The camera pans to the housing estate in which Kati has a room. Recordings from the outside of the window with Kati and from the inside with her view of the parents show the staging of the sequence. During the Second World War, the company, along with Messerschmitt and Junkers, was one of the leading German manufacturers of military aircraft, long-range bombers and surveillance and rescue boats (Nottaris 2013). The following sequence documents a visit to Konstanz and from there it goes on to the Pfänderbahn in Bregenz, which opened in 1927. The family then visits the historical sights of downtown Constance.

A subheading informs about the visit of daughter Kati and her fiancé Dieter von Lüpke on August 1, 1942 in Freiburg. In the garden they eat bread rolls coated with jam. Together with workers, they clear a nest of wild bees in the roof of the garage. Five months later for the 'War Christmas 1942/43', Curt Balke took a picture of the enamel sign 'C. Balke Architect B.D.A ‘, so he is a member of the Association of German Architects. On this foggy winter's day, they then take a trip to the Pension and Café Wiesneck in Buchenbach, about 15 km away. Today it serves the Institute for Civic Education Baden-Württemberg as a training and conference center for young people and adults (Studienhaus Wiesneck o. J.). The film ends with a stroll uphill by the elegantly dressed in black Balke von Buchenbach couple in the Dreisamtal, presumably to the Wiesneck castle ruins.