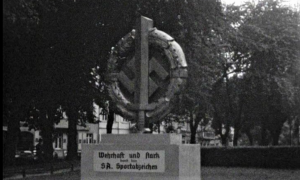 An huge SA sports badge was set up as a memorial in the city of Karlsruhe(Foto: LFS)

A good example of the appropriation and reorientation of sport by the National Socialists in the direction of military sport is the film "Karlsruhe Sports Festival" about the acceptance of the SA sports badge in Karlsruhe in 1935. This sports badge was awarded to men who were active in sports according to this Nazi ideology to promote 'public health'. The honor could even be revoked if the wearer did not behave in accordance with Nazi ideals. Until February 1935, membership of the SA was necessary to acquire the sports badge, after which Hitler determined that it could also be acquired by non-SA members. By early 1937, it had been awarded over a million bronze, silver and gold awards. The aim was paramilitary training to improve "military strength"; accordingly, it was renamed the SA military badge in January 1939. Wearing this Nazi badge was banned in the Federal Republic of Germany in 1957. 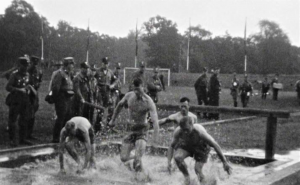 The SA was omnipresent on the sports facility(Foto: LFS)

But as early as 1935, the test included special exercises such as a difficult obstacle course with crawling under a wire entanglement, small-caliber shooting, club throwing and throwing at target - the clubs were shaped like hand grenades -, a 25 km march with full equipment and off-road sports. That is why men in SA uniforms are omnipresent in the film, and a march through Karlsruhe in SA uniforms and with an SA music corps can also be seen. A memorial with the enlarged SA sports badge has the slogan “Resilient and strong through the SA. Sports Badge ". The film shows the various disciplines and ends with the staging of masses of fencers, boxers, gymnasts, a dog squadron and a parade in front of a large audience, which is common for the Nazi regime. The National Socialists saw such appearances as an opportunity to effectively stage the 'Volksgemeinschaft'. An SA leader gives a speech that cannot be heard in the silent film. In 1935, the '1. Gaufest of the Reichsbund for Physical Education‘ took place, which was even more civilized and in which even women could take part. Unfortunately no film recordings of it have survived. 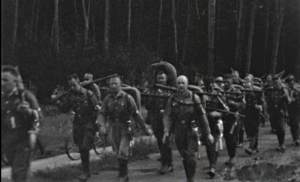 Sport and physical fitness were very important to the National Socialists in order to strengthen the 'people's body' in Nazi terminology and thus the nation and social cohesion; they also received physical training as military training. For example, the goal of sporting activities at the SA was formulated to be “to put the forces strengthened through sport and play at the service of race and people. The physical exercises also have the task of bringing up a fanatical National Socialism, and sport and gymnastics should only appear as training for a fight. "(Joch 1982, p. 725) For this purpose, a control of the sports clubs was necessary. The new "Reich Sports Commissioner" Hans von Tschammer und Osten was able to redesign the association and organizational structures at the end of May 1933 and set up a "Reichsführerring" to which the professional associations belonged and were subordinate. Only they had the right to organize championships and other events. Both the Workers' Gymnastics and Sports Association and denominational sports organizations were smashed. This realignment of the sports associations to the new political conditions was implemented immediately. The leader principle was introduced in the clubs and the democratic traditions of the clubs were renounced.

Jewish athletes were banned from membership in sports clubs for racist reasons. They had been very active there, because it was an area in which anti-Semitic reservations could be refuted through personal contact and the Jewish fellow citizens could be integrated into German society. This process of exclusion for ideological reasons cannot be seen in the amateur films. Nevertheless, it is an important chapter in German sports history. In 1936 at least 21,000 Jewish athletes were organized in 236 Jewish sports clubs such as 'Makkabi' or 'Schild'. Prominent examples for dealing with Jewish athletes is the high jumper Gretel Bergmann, who, despite great chances of winning, was not allowed to start at the Olympic Games in 1936 (Löwenbrück 2003; Pfeifer 2011). It had been used by the Nazi regime for reasons of power politics in order to avoid a boycott of other countries. Another prominent athlete who was prevented from continuing his sporting career by the National Socialists is the racing driver Adolf Rosenberg, who was one of the most important German motorsport athletes in the 1920s and is also no longer allowed to start.