Children's festival on the Freiburg airfield at the 850th city anniversary

The amateur filmmaker Helmut Ecker documented the 850th anniversary of the city of Freiburg im Breisgau in color in 1970 with his 16mm camera. From the recordings of the whole week, he put together the film "850 Years of Freiburg", which is divided into the individual events in this Upper Rhine Cinematheque. The whole event took place between June 5th and 14th 1970 (large parade, Alemannic week, wine festival, parade) . This film excerpt shows important personalities on a tour of the children's festival, which took place on the Freiburg airfield near the French barracks. Most of the pictures were shot in half-close or full-length and subsequently accompanied by music reminiscent of fairground music; there are no original sounds or background noises from the event. Only the sack race was commented on afterwards. 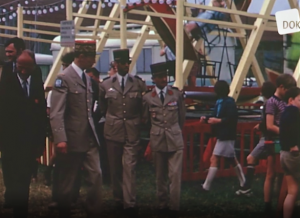 The first scene shows the then incumbent Mayor Dr. Eugen Keidel together with his wife and with the French general of Base Aérienne 253. Also the commander of the Freiburg airfield Major Charrier, the location officer Capitaine Corre, the liaison officer Capitaine Hees, the commander d'Àrmes de la Place de Friborg, the general André and the commander of the 3rd Division General Vaillant were invited and some of them can be seen in the film. These 'guests of honor' take center stage and were in the focus of Ecker's camera, who document the entire visit. Together they explore the attractions of the children's festival and pick up their rifles at the shooting range. Mayor Keidel and the French General André compete in the sack race against the youthful competition. Visibly out of breath, they cross the finish line. The children's festival took place from June 11th to 13th, 1970 from 2 p.m. to 6 p.m. The planning had already started in February 1969 by the mayor's office. The organizers were the city of Freiburg and the Breisgau fools' guild. The costs of the children's party were estimated at around 1,500 DM at the beginning of the planning. 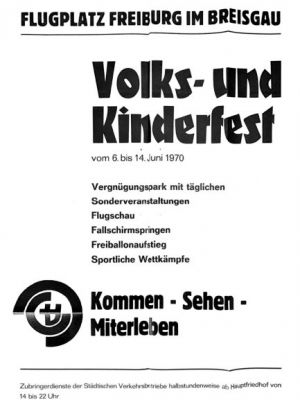 A poster annouced the peoples and children festival at the French airport (Source: Stadtarchiv Freiburg C5-2297)

Since the annual "Open Day" of the French armed forces was to take place at a similar time on the airfield, it was decided to hold this event after the children's festival and to work together at the associated fair. However, the French did not want the children's festival to steal their show. Ultimately, there were many attractions such as bumper cars, a Ferris wheel, children's carousels, a swing boat and two shooting ranges. In addition, sports competitions for children were organized with the help of the House of Youth. To make these games more attractive, prizes were given to the first three winners. The prices were estimated at around DM 500. These were, among other things, books, scooters or teddy bears; in addition, prizes were donated by local breweries. In addition to rides and competitions, visitors could also watch a puppet show in the sports hall or take a ride in a pony carriage. Of course, the physical well-being of the visitors was also taken care of. The management was mainly carried out by the airport restaurant. Since the airfield was not accessible to traffic and was difficult to reach for visitors, a feeder line was set up with the transport companies. The special buses drove between the main cemetery and the airfield.

The children's festival was advertised on the one hand via the program for the city anniversary, and flyers and posters were also distributed in the area. Another promotional measure was the distribution of free tickets. The showmen made 120,000 free tickets available for the German and French children, which could be redeemed on all rides in the afternoons. In return, the showmen were waived their fee. Around 100,000 free tickets were issued to children and families in the Freiburg area through retail stores and department stores. With the help of the youth welfare office, 1,000 free tickets were also given to the Günterstal orphanages, the railway orphanage and the Otto Meyer home.

The festival was opened by Mayor Dr. Keidel with the words “Come on now! Turn everything! " on Thursday, June 11th at 3 pm, with the participation of the Freiburg Children's Choir. As the motto of the opening day was“ Franco-German Children's Festival ”, French children were invited especially for this day. 10,000 free tickets were provided and distributed to French children with the help of the liaison officer of the 3rd Division. On Friday there was a special program such as parachuting and model flying demonstrations. The highlights of the last day were the start of the Graf Zeppelin free balloon and a balloon competition. The cost of 1,000 DM for the balloon launch was financed by advertising for the Hertie department store in Freiburg.

In addition to the events mentioned and recorded in the film, the program of the anniversary celebration also had other program items. For example, there was an organ concert, wind choirs played from the towers and gates of the city, a citizens' ball with a dance tournament and a summer ball from the University of Freiburg. The city's 850th anniversary was celebrated extensively. The 900th anniversary in 2020 largely fell victim to the corona pandemic.