Children's festival parade and fair in Gaggenau 1937. The film was subsequently 'denazified', e.g. Swastika flags were painted over and Nazi organizations did not show up in the pictures.

ZT: Children's Festival - Commercial and Singing Club Gaggenau 1937 Parade: Music group are marching past; a man with a tailcoat and a cylinder on a high wheel; Children with wigs and costumes in the style of the 18th century / Children in a boat on wheels / Several decorated floats with children are passing by / Decorated trucks with young women on the bunks / Young people on bicycles / Tandem with several people and sign "Family outing "/ Children on a float with an oversized basket / stalls and rides (vE) / children in Renaissance costumes; little boy on tricycle with trailer / Marching suit in suits and bowlers lead the move; afterwards some men in suits; then children with decorated sticks; again man on high wheel / Festwägen (v.E.) / two children disguised as alarm clock / Drummer; behind it, there is a festive car / decorated horse-drawn carriage with children on the bunk; then girl in uniform clothes / float "Holzwürmchen" / car with the inscription "Drink milk!" / decorated Benz lorry /

The children's festival with a parade in Gaggenau had become a veritable tradition. It took place in 1903 for the first time. After a ten-year break in and after the First World War, it was regularly organized again from 1924 onwards. It was organized every summer by the "Handels-Gesangs-Verein Gaggenau". The first footage dates from 1912 (LFS 3508), and then the children's parade and the associated fair were regularly documented with film cameras. If you look at the different years, it is noticeable that there are always recurring elements, such as the music bands, the children with flower-bedecked, summer-day sticks, the motive carriages pulled by hand, with oxen or horses , and horse-drawn carriages. The motive cars are not reminiscent of carnival parades of the region. 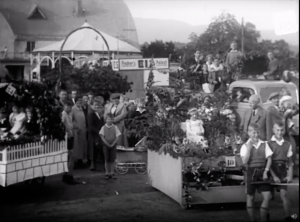 The parade participants present themselves in front of the camera(Foto: LFS)

Therefore, the pictures of the children's festival of 1937 are quite typical, because they show the mentioned elements of the parada like the music bands, the beautifully dressed children with the flower-decorated rods a pretzel at the top, the motive car on various themes and sequences from the Festplatz. What's surprising is what you do not see. For comparable events such as the move to 600 years Philippsburg (LFS 1407) NS formations are an integral part of such events, the city is decorated with swastika flags and Nazi representatives take the move from. All this is missing in Gaggenau, at least in the traditional pictures. 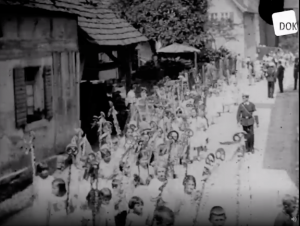 The swastika flag, which has been painted over, is clearly visible at the top right corner beside the logo (Foto: LFS)

The pictures are partly badly damaged, heads are cut off or the picture ends in half. In the group of young people in front of the ice cream stand of the company Fischer from Karlsruhe not one is uniformed. The long shots are made, as all persons look in the direction of the camera and hardly move. The recordings look like an arranged tableau. After the recordings from the fairground, the parade is shown again with a band at the front. They are gentlemen with black suits, and many wear a melon on their heads. It is followed by a large group of children who are well dressed, the girls mostly in white. They wear the already mentioned, summer day sticks' with the pretzels at the top. This is followed by several motive cars and then two teenagers who have disguised themselves as clock alarm clock. 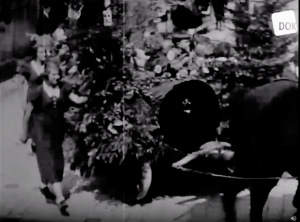 A Nazi symbol was also painted over on the front of this car, only the small swastika flags were spared from the purge (Foto: LFS)
And then there is something quite extraordinary to discover. In this sequence you can see a flag hanging on the top right. It is painted over with a black dot, which does not have a fixed size, but pulsate. It can be assumed that it is a swastika flag, whose center was later clearly painted over by hand. This is an indication that the film was reworked after 1945 and cleared of all Nazi symbols, as was done with educational and instructional films. By removing symbols such as the swastika flag, they were 'denazified' and could be used as basically non-political films. The brevity of the film, which lasts less than three minutes, suggests that after 1945 many scenes with Nazi reference were removed. On one of the following motive cars, two boys with HJ uniforms are sitting in front of the horses. The car is decorated with small swastika flags, which were apparently overlooked during retouching. But there is again a spot on the front of the car, which was covered with a large black spot. This cover-up shows that the children's festival in Gaggenau in 1937 was politically seized by the National Socialists and wanted to erase the evidence for it after the end of the Second World War. However, this was done so unprofessional that you can see the falsification on closer inspection of the images clearly. Such editing of photos and films is not a new phenomenon, but also very early to prove. Therefore, it also shows here that our trust that a picture shows objectively what was was to be questioned for a very long time. Kay Hoffmann