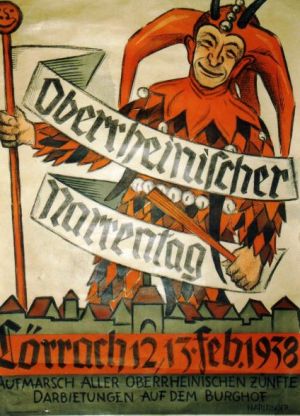 The carnival in Lörrach has a long tradition. Even before the official proclamation of the carnival on 11/11/1935 there were corresponding events. But the founding of the Lörrach Fools' Guild on January 17, 1936 gave the carnival event a formal structure, as in other places on the Upper Rhine Valley. The Lörracher Fools' Guild was a founding guild of the Upper Rhine Association of Fools' Guilds (VON), in which seven fools' guilds for the Swabian-Alemannic Carnival were organized (Breisach, Freiburg, Kenzingen, Lahr, Lörrach, Staufen, Weil am Rhein). There are now over 80 member guilds, divided into six bailiwicks. The aim is to maintain the customs of the Swabian-Alemannic carnival. At that time, the Lörrach fools 'guild offered to organize the 1st Upper Rhine Fools' Day on February 12 and 13, 1938. Walter Berlinger, member of the Lörracher Elferrat and ambitious amateur filmmaker, documented the event with his 8 mm camera. Those involved in the demonstrations liked his recordings. Berlinger was the authorized representative of the local brewery Lasser and made numerous films about Lörrach and its surroundings. The 1st Upper Rhine Narrentag was a complete success. Not only did the event pay off financially, it also attracted attention and a good reputation for the Loerrach guild and the VON. Some other guilds were jealous of this success.

The film begins with the reception of the guild masters from various locations in the town hall of Lörrach on Sunday, February 13, 1938, after a festive guild evening beforehand and it is snowing. Mayor Reinhard Boos, head guild master Johann Maier Muser and guild king Fritz Asal (guild name Fritz Ludin), accompanied by the 1st jester of VON Harry Schäfer, will attend the reception. After the reception, the guild king comes from the town hall, followed by other eleven councilors of the founding guilds. The guild king is present at all events and is accompanied by his guild entourage, which consists of the guild fool and the four 'pages of the king'. 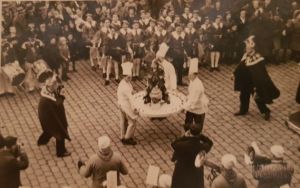 Filmmaker Walter Berliner (left) documents with his camera the tradition of the 'Dellerschlegg' (Foto: Narrengilde Lörrach)

Carnival groups, guilds and cliques gather on the street for the guard parade on the market. Numerous spectators line the streets of the city center. The Elferrat is positioned on the balcony of Cafe Binoth, which the parade is passing by. It starts at 1 p.m. with a total of 60 carnival groups, led by riders and then guilds and groups. They are shown with a pan of the camera. The first thing to see is the Lörrach Guild Guard, which was founded by the daughter of the senior guild master with 26 higher civil daughters of the city.

The film changes to color, which is, however, faded and greenish. Harry Schäfer's speech from the balcony is documented in the film silent. A banner of the German labor front hangs on the balcony with the sentence "We march with you!", a sign of the appropriation by the Nazi regime. Below are the Freiburg carnival callers with their wooden ratchets. A boy in the Zundelhäs walks towards the camera, which introduces the group of Lörracher Zundel, which was founded by the gymnastics and sports club. Their costume consists of a red-yellow-green 'flecklehäs' with a horn cap. The guild of fools does not wear the mask because it would be too dangerous for sports such as building pyramids. Their tradition is the 'Dellerschlegg'. Here cream is spread on a large plate and a wooden snail is hidden in a pile of cream. The zundels circle the large plate and lick up the cream until the wooden snail is found. The finder is then crowned king of the willow. This can also be seen in the film. Now the reports from various guards to the guild king take place. 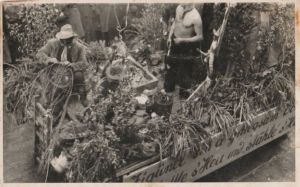 The presentation of the Loerrach clique 'Zigüner' was courageous, because this minority was persecuted by the Nazis (Foto: Narrengilde Lörrach)

There is a change of location in the film. On February 28, 1938, the Lörrach fools' guild and its most important representatives were invited to the Carnival Monday parade in Freiburg. Walter Berlinger had positioned himself with his camera on a moving truck and thus took some impressions of the move. It leads past the old city gate and the victory monument on today's Europaplatz, the lively audience lines the streets. The Zigüner clique Lörrach attracted special attention, disguised themselves as traveling people on their carnival car, a rabbit is skinned and an open fire burns. This group was founded in 1936 and it was a courageous step at that time, as Sinti and Roma were discriminated against and persecuted by the Nazi regime. 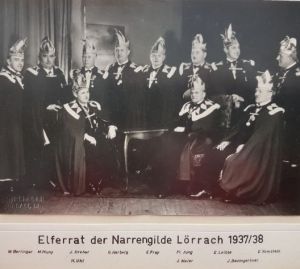 The eleven leaders of the carneval were notable men from the city(Foto: Narrengilde Lörrach)

The next recordings are from Shrove Tuesday, March 1st. The guild members are 'paid' in the castle courtyard in Lörrach. Sweets are thrown at the audience. In the last section of the film you see the members of the Elferrat one after the other, who are producing in front of the camera in the Hirsch Gasthaus in a half-close shot. Among other things, the custom of purse laundering is carried out and all members grin with big smiles at the camera. The members of the Elferrat 1937/38 were respected Lörrach personalities who work successfully in trade, craft and industry. The hairdresser Johann Maier-Muser (1890-1979) was the senior guild master at the time and was nicknamed "Schmuser" because he liked to seek physical contact with women.