Travel to Switzerland and Lake Constance

Tour of the zoo in Basel; Timetable of the ships from Constance; Ship landing stage, family in the restaurant, promenade by the lake; Collegiate Church in St. Gallen; Drive by car through mountain landscape; Women in costume; Car on country road; Women in costume on the way to the church and in front of the church; Girl with Käthe-Kruse doll, family in front of the car; Hike to the Ebenalp, family on the terrace; Alleys in Appenzell; Family in room, woman in costume, place <not identified>; Cars on the highway; Klamm <not identified; possibly Rappenloch gorge near Dornbirn>;

Family at the Rhine Falls near Schaffhausen, boat trip to the waterfalls); Drive through the Schächental and over the Klausenpass, snowball fight; Trip with the excursion boat on Lake Lucerne; Drive by car along Lake Lucerne; Lower town in Bregenz; Passengers board the Lake Constance ferry, music band on the quay, port in Lindau; Meersburg: tour of the old town, visit to the old and new castle; Ferry ride, seaplane; Mainau and Unteruhldingen landing stage; Domestic pigs; Sailing ship; Minster St. Nikolaus in Überlingen and in Birnau; Show car; Jetty at Lake Constance (probably Unteruhldingen), family eating on the terrace of a restaurant, sign 'Zu den Pfahlbauten'; Pile dwellings in Unteruhldingen, Baden im See; Evening atmosphere. // 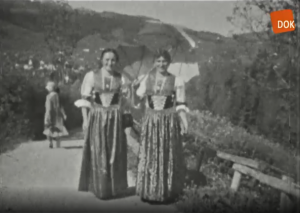 During the trips, traditional costumes were also documented in the film(Foto: LFS)

The black and white private film in 16mm format by the Freiburg architect Curt Balke is an impression of two family trips in 1930. A distinction must be made between a trip with two befriended couples in three cars to northern Switzerland and along Lake Constance and one Excursion by the Balke family alone to Lake Constance. The recordings show that these are middle-class families who have not suffered the consequences of the economic crisis and who can enjoy life. Even in this period, cars are a sure sign of prosperity, because only wealthy layers of society could afford an automobile at that time. On the trip they use the tourism offers that have developed since the 19th century. The people involved book tours on tourist ships and ferries and hike in the mountains with guides. There is a stop at bars and restaurants, the sights of the places are visited and extraordinary encounters and events are documented on film. 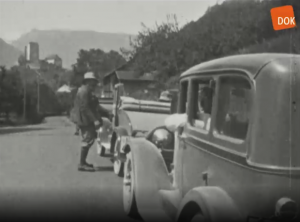 Traveling by car was a certain luxury in 1930 (Foto: LFS)

In the Basel Zoo, where the film begins, around a dozen animals are shown in their enclosures within 40 seconds. Some guards' attempt to recapture a fleeing young camel has a humorous quality. A special motif is a group of women in traditional Appenzell costumes with elaborate hat decorations, which is definitely interesting from a folklore perspective. The trip to the Rhine Falls near Schaffhausen, where the open rowing boat comes very close to the wildly falling water, is particularly adventurous for the family. The filmmaker can convey this feeling very well in his pictures, as well as the fascination of the mountains and nature during the hikes. This is contrasted with the fascination with technology with cars, ships, fancy motor boats or the landing of a seaplane on Lake Constance.

Curt Balke is in prime age at 47, his ten-year-old daughter Kati with her pageboy hairstyle typical of the time can be seen in a shot with her Käte Kruse doll. Since Curt Balke can also be seen himself in some shots, he must have passed his 16mm camera on to others who shot with it. The trip to Switzerland of the three couples and the two teenagers begins at the Basel zoo, then the family goes to Lake Constance. Zoos were set up in the 19th century as a civil leisure activity with exotic animals from other continents. A series of excursions into the Swiss Alps then begins with Sankt Gallen. The first to Appenzell, then deeper into the mountains. Passes, gorges and lakes are visited. Later it goes back down to the Rhine Falls near Schaffhausen, then up again to discover Lake Lucerne. The last part of the film is an excursion by the Balke family to eastern Lake Constance. It is noteworthy that despite the time of crisis, they can afford such trips. With the recordings they are undoubtedly trying to create images for themselves to remember, but possibly also to show relatives and friends what they can afford.

From the mostly cheerful pictures one can see that these people happily go on discovery tours, that nature attracts them, that they admire its power and that they enjoy cultural experiences. They are interested in historical buildings, churches, castles, customs and traditions. It is a recreational and at the same time a cultural educational journey. However, the focus is on shots of nature and landscapes. The two girls are often in the picture with their activities, for which the cinematic memories may also have been recorded. The impression remains of a beautiful, funny and almost wistful family trip. With the medium of film, Curt Balke wanted to preserve the memories of the beautiful hours for the future.

The two trips take place in the summer of the 'crisis year' of 1930. The Weimar Republic found itself in a difficult political and economic situation. The Great Depression that sparked in the United States destroyed substantial parts of the economy. Between 1928 and 1933 bankruptcies doubled. Heinrich Brüning of the Center Party was Chancellor of the Reich, but did not have a majority in the Reichstag. With his 'system Brüning', he relied on 'emergency ordinances' from the Reich President von Hindenburg - bypassing the Reichstag that was actually responsible. Brüning's first cabinet was in office from March 1930 to October 1931. During these difficult times, poverty increased through unemployment and the discontent of large sections of the population. The National Socialist NSDAP became Germany's second largest party. The crisis also raged in Switzerland. The Swiss Federal Council decided to support endangered economic sectors, including the hotel industry as the central pillar of the tourist infrastructure, which supplied the country with considerable foreign currency. Despite the rise of right-wing conservative movements, Switzerland, unlike many other European countries, remained without political upheaval.