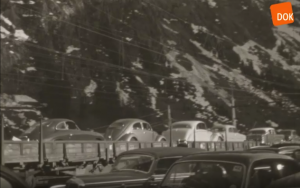 Car loading on train at the Lötschberg tunnel (Foto_ LFS)

The private film by the Freiburg architect Curt Balke and his wife Käthe together with a group of travellers is typical of the emerging tourism after the Second World War and the Germans' longing for Italy. The Balkes traveled there several times in the early 1950s and documented it with their 16mm camera. The first shot shows the self-made information "Eastern 1955", which enables the clear dating. This is the beginning of the recordings of the Balke couple's Eastern trip with their VW convertible to Lake Maggiore across Switzerland to Italy. We see beautiful mountain landscapes and riverside roads along the Sempachersee and the Vierwaldstättersee. While driving, Käthe Balke films the passing landscapes from the car. They take a break on the shores of Lake Lucerne and set up a picnic. The picture shows a tunnel entrance with the coat of arms for the canton of Uri with the typical 'Uristier', an aurochs head with a red nose ring and a red tongue. At Lake Lucerne, Ms. Balke folds the blankets in front of the mountain scenery after a rest on the lakeshore. The car is then loaded in Kandersteg am Lötschberg with numerous waiting vehicles. This is also an indication that many others are drawn to the south. The Lötschberg tunnel is a 14.6 km long railway tunnel that connects the Kandertal in the Bernese Oberland with the canton of Valais. A train is already loaded for passage through the tunnel, and you can see the occupants in the cars. Balkes film the waiting train before they enter the tunnel themselves on their train.

The next shots again show beautiful snow-covered mountain ranges and a waterfall. On their journey through Switzerland, the Balkes reach the town of Bellinzona in the canton of Ticino, which can be recognized by the imposing fortress 'Castelgrande'. Since the year 2000, this complex, together with the two other medieval castles and fortifications, has been part of the UNESCO World Heritage. The view of the fortress was likely taken from the old town of Bellinzona. Other shots show impressions of the old town, including the striking tower of the Palazzo comunale (town hall) and the hustle and bustle of the city. A large archway with a plaque and a statue comes into the picture. The camera is very moving and pans over the sights. In one take, Balke holds three enamel signs on a pub that advertise refreshing digestifs and beer from Bellinzona. The following camera pans capture more impressions of the landscape before Ms. Balke comes into the picture with a view of the monastery around the pilgrimage church “Madonna del Sasso”, which can be found above Locarno on the northern shore of the lake. Balkes visit the place of pilgrimage, document a coffee tour with other fellow travelers and show the guest room with the large window adorned with wrought-iron ornaments in one swing before they continue. 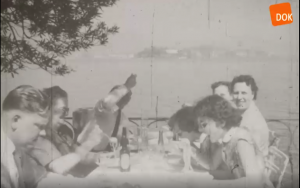 And there it is, Lake Maggiore, filmed from a moving car. After a good minute, the landscape and the lake fly by. Until the tour group decides to switch to the water and cross the lake with a car ferry from Verbania on the Piedmontese side of the lake to Laveno in Lombardy. To this day it is the only car ferry connection on Lake Maggiore. In the next sequence one can see the two characteristic towers of the city of Verbania. The exuberant-looking tour group continues to travel along the lake. Sights and places keep coming into the picture. Among other things, the company makes a stop at a lakeside promenade to get on a ship and enjoy the trip across the water. Unusual stone buildings that appear to the starboard side of the lake arouse Curt Balke's architectural interest.

You then see holiday shots with a church tour, narrow streets with stairs in Stresa and the troop strolling in the shopping street and on the promenade. Curt Balke strolls arm in arm with his wife. A boat takes you to the garden island Isola Bella, which is about 400 meters from Stresa on the Piedmontese side in the Lago. The 'beautiful island' is built on with beautiful tiered, baroque gardens and a palace, which still attract tourists today. Only a few sections of the complex with numerous statues and arcades can be seen in the photos before two men in dark clothes with matching hats come into the picture.

The film shows a hilarious tour group who are visibly enjoying the 'Dolce Vita' in Italy as a holiday destination. Again and again beautiful pictures of the promenades with southern vegetation, impressions of the landscape with mountain panoramas, excursions or crossings by ship and life in the villages are captured. In one shot, a child in costume is held up to the camera. The recordings end with a trip with the mountain railway from Stresa up to the Mottarone summit, where the snow still clearly remained in April.