Various trips to Switzerland, along the Rhine and the Moselle 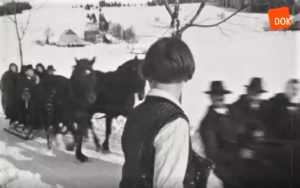 Winter sports are important for the Balke family (Foto: LFS)

The black and white, silent private film by the Freiburg architect Curt Balke in 16mm format shows various family trips. Shortly before her daughter Kati's 13th birthday, her parents visit her on September 8th and 9th, 1933 in the Adelboden children's health resort in Switzerland. Together they go on an excursion in their convertible into the mountains as far as Zurich. You can feel their fascination for the landscape with its peaks, glaciers, streams and lakes - even when it is rainy. Since Curt Balke himself can be seen in some of the recordings, his wife or Kati will have filmed him. The camera is often moved and turned out of hand. The second subject is dedicated to her winter sports in the Black Forest. For example, Balke turns the descent with a subjective camera or lets recordings run backwards. The third subject is a journey in her convertible from Trier up the Moselle to Koblenz and then down the Rhine Valley to Mainz and Schwetzingen. The focus of the 16mm film, which was probably made in 1934, is his family and the romantic river landscapes. 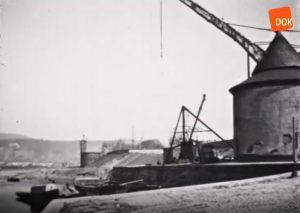 The images of the Moselle and Rhine serve romantic ideas (Foto: LFS)

In the first half of the 20th century, German tourism was largely based on a love of nature and rural life in the low mountain ranges. The increase in the number of visitors led to tourist measures such as the signposting of hiking trails or the construction of forest inns. The First World War put an end to the first heyday of tourism, due to economic difficulties, lower incomes, formalities for the entry of foreigners, higher rail tariffs, etc. Tourism in Europe had to reinvent itself. In order to keep the clientele, the prices were maintained or even lowered. Similarly, the introduction of vacation pay in Europe in the first half of the 20th century made travel easier for families. Walks and cruises became very popular. The rebuilding of tourism after the war was slow and initially focused on domestic destinations in Germany, Austria and Switzerland. Between 1933 and 1939, the National Socialists promoted mass travel with their organization 'Kraft durch Freude'. 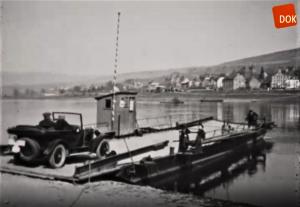 You could cross the rivers with ferries (Foto: LFS)

Wealthy families like Balkes could afford to travel more often, longer and also abroad. They visited Italy as early as 1937 (see film “Urlaub Italien”). Switzerland is a privileged travel destination for them as they enjoy hiking and skiing. In the inter-war period, economic crises prompted public authorities to promote the tourism industry with the state. The founding of the 'Schweizerische Verkehrszentrale' in 1919 is an example of such a renewal. The rail tariffs were reduced and in 1931 the free movement of automobiles with foreign registration was approved. The Balkes use this with their convertible, which is often presented in the pictures in front of the alpine landscape.

The Alps have been a popular travel destination for hikers and nature lovers since the 19th century thanks to the Romantics. In the first half of the 20th century, increasing numbers of ski resorts with hotels and leisure facilities emerged in the mountain regions. From the mid-1920s, numerous tourists came to the Alpine region in summer and winter. As a result, some municipalities carried out modernizations to accommodate tourists appropriately. From the 1930s onwards, some rural residents lived there mainly from tourism. As the cradle of German skiing, the first ski areas opened in the Black Forest as early as 1892, and in 1908 the world's first modern surface lift went into operation. Thanks to the development of winter sports, the tourist season became longer, which was previously limited to just three or four months. Snow was no longer an obstacle to travel, but a destination and a source of fun, as the film shows us. The Balkes enjoy winter sports in the snow-covered landscape, as shown by numerous other films by them. 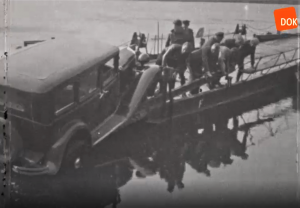 Occasionally there could be accidents, what is documented here (Foto: LFS)

On the journey along the Moselle and the Rhine, many sights, castles and palaces are visited and shown. In literary works of German Romanticism, this landscape was recognized as a place of longing, and the Middle Rhine in particular became a popular destination. Therefore, the Balkes are by no means alone. But there are also everyday situations such as a car crashed on a ferry that is being rescued. The Moselle valley was less famous, but was popular in the interwar period as the Moselle flows through three countries. Tourist structures were created between Trier and Koblenz. From the end of the 19th century, regular steamship and rail traffic was established on the Rhine, which can be seen in the pictures. The first German Rhine shipping company was founded in Karlsruhe in 1825 and offered passenger and freight transport. The significant economic and cultural area along the Rhine made the river one of the busiest waterways in the world. But Curt Balke's pictures convey a more romantic vision of the cities and the landscapes on the two rivers.