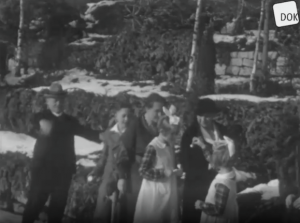 The one and a half minute silent film by Heinrich Rieker shows the family reunion at Christmas 1933 with the grandparents. In the first shot you can see the three generations of the family walking through the snowy garden. The family is quite thinly dressed with no coats. The daughters both wear a plaid dress, a white apron and a white bow in their hair. The son is wearing a white shirt, jacket and half-length trousers. The grandfather in a suit and hat starts throwing a snowball, after which the others collect snow as well. The next shot in front of the house shows the family in detail. A daughter puts a cigarette in her mouth just for fun, which her mother immediately takes from her. The father Heinrich Rieker turns by hand without a tripod and pans the camera restlessly over the people. Once again there is a pan across the large garden with a bird house. 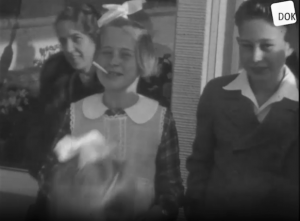 A relaxed atmosphere and time for jokes (Foto: LFS)

The following shot, which is almost ten seconds long, was shot in the living room, apparently without additional lighting. Therefore the pictures are much too dark and one can only guess that there is the big Christmas tree nicely decorated with tinsel, balls and candles. The decorated Christmas tree became a central element of private Christmas celebrations in families in the 19th century. During the Franco-Prussian War of 1870/1871, the Prussian king had Christmas trees delivered to the shelters and military hospitals, making it popular in France as well. That is why the decorated Christmas tree is a central element in both German and French private films of the 20th century. What is remarkable about Heinrich Rieker's recordings is that he concentrates entirely on the people at the family reunion and, for example, does not record making music together, giving presents or the festive Christmas dinner. The grandparents leave. They get into a luxurious car with a chauffeur who holds the door open for them. The whole family says goodbye to them; You can see them again in a close-up. The final sequence shows three puppies on the steps in front of the house and one of the girls with the family's Airdale Terrier. 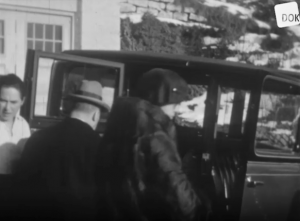 The grandparents are leavinfg (Foto: LFS)

The family are well-known shoe manufacturers from Tuttlingen. The company was founded in 1874 by Heinrich Rieker and Carl Seitz under the name ‘Rieker & Seitz’. The high-quality shoes were initially mainly supplied to wealthy northern Italians, but the products achieved a high level of awareness throughout Central Europe. In 1901 Carl Seitz left the company, Heinrich Rieker senior died in 1905. His sons Karl, Ernst and Heinrich Rieker took over the management; In 1907 the company was renamed ‘Rieker & Co.’. Today the company is still in the fifth generation of family ownership. Rieker's shoe products are now sold worldwide with a consistent brand strategy. They are known for their high level of comfort. The number of employees in Germany peaked in 1969 with around 2,000 employees. In the early 1970s, the company's headquarters were relocated to Switzerland and production expanded internationally. Today the Rieker company employs around 20,000 people worldwide, especially in Morocco, Slovakia, Tunisia and Vietnam, where the company's own production facilities are located. But they are also still active in Germany.