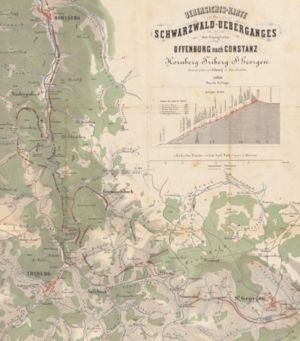 The silent black and white film by an unidentified filmmaker documents a train ride on the Black Forest Railway between Hausach and Königsfeld in 1963. From the train, he mainly films the landscape, roads, railroad cars and old farmhouses in the Black Forest. He also got off several times in order to better accommodate the stations. His journey begins in the afternoon at Hausach train station, at that time an important rail hub for various routes. On the platform you can see some people with luggage and a train employee with luggage trolleys. 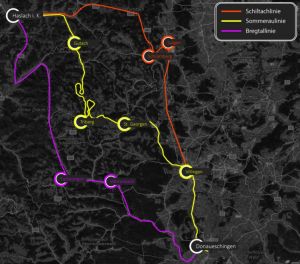 The next stop is Triberg. The hilly surroundings and the signal box can be seen in the background. The water crane is reminiscent of the steam locomotives used in the past. The difficult mountain stages required the steam locomotive to replenish its water supply in order to generate sufficient steam for the onward journey. The place Königsfeld has been recognized as a climatic health resort and as a recreational destination in the Southern Black Forest Nature Park since 1949. The weather there is stable with no major rainfall and in autumn and winter with strong sun shine. The nearby forests serve as wind protection and ensure a high oxygen and ozone content in the air. The opening of the Black Forest Railway in 1873 and the railway station brought Königsfeld the boom as a health resort for city dwellers looking for relaxation. 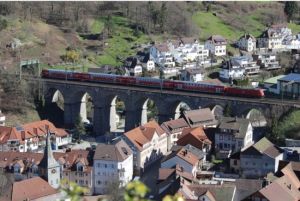 The Black Forest Railway in the viaduct of Hornberg (Foto: WikimediaCommons, 2013)

History of the Black Forest Railway

With the beginning of the industrial age, the railways quickly penetrated the landscape. Initially, the focus was on courses where the topography did not put any major obstacles in the way. This is how the section between Offenburg and Hausach was realized. This section was opened for train traffic in July 1866 (Arx 2007). First, three options were discussed as to how the railway line could run across the Black Forest in what was then the Grand Duchy of Baden (Cremer 2014, p. 185). The shortlist was the railway line via Gutach Valley (Sommerau) and the line via Schiltach and Schramberg. However, the terrain of both tracks turned out to be unfavorable. The Schiltach line was opposed to the fact that it would completely bypass the main area of ​​the Baden Black Forest industry, even if it would have been technically less problematic. Schramberg belonged to Württemberg at this time. At first it looked like the problems in the Gutach Valley were more difficult to overcome than those that arose over the Schiltach-Schramberg line. In the original draft of the Sommerau line, Johann Sauerbeck, senior building officer at the head office for water and road construction in Karlsruhe, planned two switchbacks in 1846. In 1857, however, this plan was revised by his successor Robert Gerwig. With his idea of ​​artificially lengthening the route through loops and tunnels, the climb at Triberg should be better overcome. The Baden cities of Hornberg, Triberg and St. Georgen, which are located in the center of the commercial Black Forest, advocated the route across the Gutach Valley. With his novel idea, he overcame the challenging topography by dodging side valleys several times with large loops. He also wanted to use fewer bridges and more tunnels. This has the advantage that the route was less endangered by falling rocks, snow and avalanches. In 1867 construction began in the Black Forest. After temporary work interruptions, among other things due to the Franco-German War of 1870/71, the Black Forest Railway was able to open on November 10, 1873.

With the growing need for more transport capacities in freight transport, an expansion to two track lanes was implemented just 15 years after the Black Forest Railway started operating, which the far-sighted Gerwig had already planned when planning the tunnels. From 1888 the Black Forest Railway from Offenburg to Villingen ran on two lanes, and the line became double-track in December 1921 (Arx 2007). From 1956 the Black Forest Railway was converted from steam operation to diesel operation in order to reduce personnel costs to a one-man occupation. The railway introduced diesel engines suitable for mountain railways in the V200 series locomotives. The route was electrified between 1972 and 1977, which shortened travel times by up to 36 minutes (Cremer, 2014, p. 189f). In the second half of the 20th century, tourism in the Black Forest became an important economic factor for the entire region all year round. In addition to the well-developed roads for car traffic, the Black Forest Railway still offers a comfortable journey to this day.