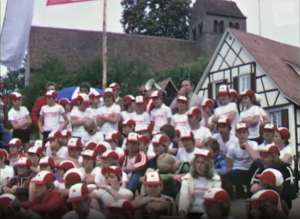 Before the start, everyone gathers for a group picture (Foto: LFS)

The colored amateur film about the 4th Lahr soap box race in 1979 was shot by the Schmalfilm-Club Lahr. The race took place on Sunday, June 24, 1979 at 1 p.m. For the Mediathek Oberrhein the long film was divided into two parts, preparation and the actual race (see film “Soap Box Derby I”). The first part shows the preparation and construction of the racing cars as well as the first training drives. After the launch pad had been set up and every soap box had been checked for safety, they could start. The race started at the Burgheimer Church in the Burgheimerstraße and the track with a length of about 350 m went downhill. The entire racetrack was provided with barrier tapes and bales of straw lay in the corners to secure the track and the drivers. The destination was at the Stefanienstraße junction. There was a neat 'run out' for the soap boxes to guarantee maximum safety.

During their parade, the participants are accompanied by a music group (Foto: LFS)

On the day of the race it initially rained heavily, but the weather improved at noon. 72 participants from the Ortenau district had registered for the actual race. At the start, three participants had no soapboxes ready to start, two did not show up. Therefore there was a starting field with 67 soapboxes, which competed in pairs against each other to achieve the best times. The Canadian Major Berthiaume and Lahrs Mayor Philipp Brucker, who held office from 1961 to 1981, welcomed the participants before the race. The drivers were guided from the finish to the start by the minstrel of the Lahr fire brigade with drums and fanfare. They marched along the racetrack in three rows, the red and white caps of the city savings bank on their heads. A group photo was taken in front of the church before the start. The catering along the race track was taken over by three companies, each sponsoring a soap box. The Lahr youth associations took responsibility for selling beverages and received 20% of the profit. Among other things, the sports club 'Solidarity', the Friesenheim youth club, the Lahr Catholic youth team and the youth fire brigade made themselves available. The 4th Lahr soap box race was followed by a total of more than 6,000 spectators. In order to win as many children and young people as possible as spectators, 25 holiday passes were raffled. 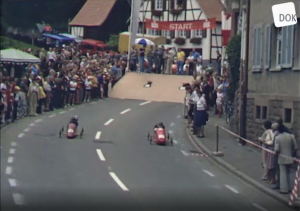 The racing cars start from a ramp at the Burgheim church (Foto: LFS)

Each run of the race lasted less than a minute. The film shows the runs from different perspectives for which the cameramen of the Lahr Narrow Film Club were responsible. There are also impressions from the audience at the racetrack. There were two rounds each. The winner Helmut Schäfer from Neuried-Ichenheim was ten years old at the time. It was his first race that he won with first place; he supported the authors with his memories. After the first two runs with 76.490 seconds, he was still in third place, but then achieved 37.437 seconds and 38.158 seconds (together 75.595 seconds) in the two races for the final qualification and thus secured the top position. He referred Jörg Reithmayer to 2nd place, who was leading with 76.291 seconds after the first two races. 3rd place went to Klaus Erhard from Friesenheim, 4th place to René Rössler. All four drivers then took part in the national championships from July 27-30, 1979 in Ilbesheim. The first three places in this race qualified for the German championships. 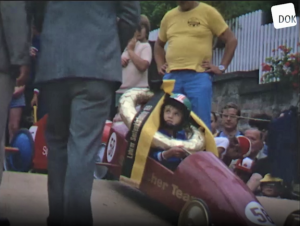 The winner is honored with a golden wreath (Foto: LFS)

The race day ended with the departure of the three winners and those placed. The winners were officially honored in the wholesale market hall. They were allowed to climb onto the podium and received their trophies from Mayor Philipp Brucker. There the prizes for all participants were set up with a bicycle and a rubber dinghy as the main prizes. Everyone who took part in the soapbox race received a medal. Then a program was offered by the sports club 'Solidarity'. After such a successful race, a soap box club was supposed to be founded, but this was never put into practice.

The soapbox sport came to Germany only in 1949 through the American troops in order to offer the young people a meaningful leisure activity based on the American model. In the first ten years around 60,000 young people took part in such races. From 1951 the Adam Opel AG, a subsidiary of General Motors since 1929, got involved with an organizational center in Rüsselsheim. It delivered uniform wheel sets and took over the patronage of the German championships. Many clubs and local groups of the German motorclub supported the races. The ADAC took on the organization of competitions and produced an almost 100-page manual. There the details for the racing cars, the tracks and the sponsorship were explained. Opel AG supplied wheels and steering for the soap boxes until 1972, which were also supposed to meet international standards. After that, Opel got out and the soapbox races lost their popularity. So the Lahrers were a little late with their race.