Ski Metting 1908 on the Schauinsland mountain Skiing was already gaining popularity back then (Foto: LFS)

Winter sports and especially skiing emerged at the end of the 19th century. The expedition report by the Norwegian Fridtjof Nansen, who wrote in German in 1891 with the title “On snowshoes through Greenland”, had a major influence on this. It was through this publication that many became aware of the new sport. For example, there was a group of young men in Todtnau who were interested in it and who provided and tried out such snowshoes in Norway.

“There is evidence that the French consul Dr. Pilet was the first to reach the Feldberg on skis. On February 8, 1891, he entered his name in the Feldberger Hof's guest book with the addition on Norwegian snowshoes ” (Hitz 2011, p. 21). The Feldberg in the southern Black Forest became a popular area for this because it was easily accessible via the Höllentalbahn, which opened in 1888. The pioneer Dr. Robert Pilet, who worked at the French consulate in Mannheim, took the train to Lake Titisee and from there set out for Feldberg (Duval 2014). He then taught the Todtnau group to ski and a year later the Ski-Club Todtnau was founded as the first ski club in Germany, followed by the Freiburg Ski Club in 1895 and the Academic Ski Club in Freiburg in 1903 (von Savigny 2003). This was the hour of birth of winter sports in the Black Forest, because the ski clubs carried out extensive public relations work. Your press releases were also sent to national newspapers (Hinz 2011, p. 22). From December 18, 1909 to March 6, 1910, the 'International Winter Sports Exhibition' took place in Triberg, with the focus on skiing (Hinz 2011, p. 26). The competitions of the Feldberg Ski Club met with growing interest and an estimated 3,000 spectators on a Sunday in 1914 (Hinz 2011, p. 28). Winter sports in the southern Black Forest became more and more important for tourism and the Feldberg developed into the center of ski tourism. 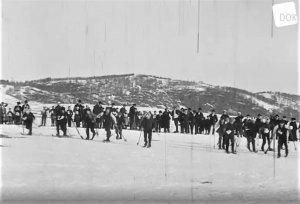 Here the start of a ski race of the youth (Foto: LFS)

The film "The Ski Festival 1908 on the Schauinsland-Halden (Black Forest)" comes from the Hermann Hähnle collection and was probably produced on behalf of the company "Welt-Kinematograph" in Freiburg. This is one of the oldest film productions in Germany, which also operated a national cinema chain (see film “Bootstour auf der Dreisam”). Hermann Hähnle was one of the most important film pioneers in the south-west, who from 1904 took private family films as well as nature and animal films with a 35mm camera, as his mother Lina Hähnle was the founder of the Bird Protection Association (Hoffmann 2013). The film begins with a long pan over a large group of skiers. A skier with a hat drives across the picture. Two men in hats also walk through the picture and stop for a moment because the camera was an attraction at the time. The next pan across the landscape is a bit jerky. Then he shows the start and finish of young people in a race. The camera has the waiting audience in view, which is panned several times. The young skiers wipe through the picture with a certain blur. In the next shot, the active people and their audience trudge up a mountain, some of them with their skis over their shoulders, in order to probably follow a ski jumping, which is only hinted at in the film. The audience forms a line and the ski jumpers can only be seen briefly. The camera records a group in the foreground and the audience can be seen at the top of the picture. Then the camera changes its position, but without seeing more of the ski jumping. The film ends with a pan over the Gasthof and Pension zur Halde. This building was used as an inn for six hundred years. Around 1880 it was used as a guesthouse for holiday guests in the summer. The small chapel, which goes back to Josephine Dreyer, was inaugurated in 1894. 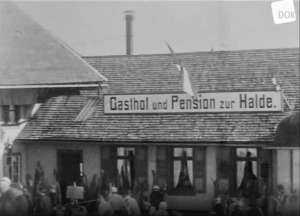 The inn 'Gasthof zur Halde' was a popular stop for skiers (Foto: LFS)

The short film can be viewed as an early promotional film designed to draw the attention of an urban audience to the winter resort. “The 1908 Ski Festival on the Schauinsland” ran on December 15, 1908 at the opening of the new Residenz Theater in Karlsruhe with 300 seats as part of the gala performance (Bechthold 1987, p. 24) and was then part of the winter sports scene like other short films Repertoire of the cinema program.