Excursion to Titisee in the Black Forest in the winter of 1934 with a spectacular motor sport race.

The short, silent black and white film in 16mm format documents the events at Titisee-Buchheim in January 1934, as a title reveals at the beginning. The pictures were filmed by hand without a tripod. Therefore, the film is a bit restless and partly not properly exposed. First you can see a little girl who is playing with three puppies on a stone staircase in the bright sun. Then the camera pans from right to left over a wintry landscape characterized by snow-covered meadows and mountains. A family with two children is walking on a path towards a village with an old stone tower. In front of it are a construction trailer and a car. The family then walks out of the village towards the camera. The final scene shows the ice-covered Titisee in the Black Forest in a long shot. There is an ice race with racing cars and motorcycles that compete against planes. 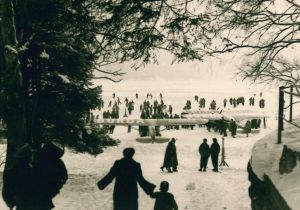 The races on the frozen Titisee attracted thousands of spectators (Foto: Stadtarchiv Titisee-Neustadt 260_106)

In the middle of the ice the racetrack is clearly recognizable and swastika flags are hoisted on the inner roadside. A double-decker airplane is making its laps above it. People have gathered in smaller groups on the ice and are all looking expectantly in the same direction. The private filmmaker has positioned himself on a hill and this gives him a good perspective of the events, which he captures in a long shot. The chase of racing cars and motorcycles with sidecars takes place on the ice surface of Lake Titisee. The camera documents what is happening and pans to the left, where other spectators marvel at the spectacle on the terrace of a house. 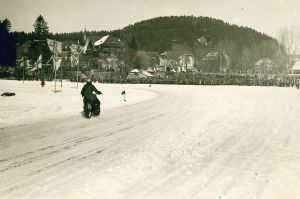 The races were a challenge for people and machines (Foto: Stadtarchiv Titisee-Neustadt 260 102)

The film allows a brief glimpse of the legendary ice race on the Titisee in the Black Forest in 1934. These events could only take place when the winter was cold enough for a thick layer of ice to form on the Titisee. Such a race took place for the first time in February 1929 and with interruptions until 1935. The popular event attracted many people to the ice-covered, glittering surface of the lake. The event grew in popularity over the years - the frozen Titisee became the backdrop and venue for repeated nerve-wracking competitions between cars, motorcycles and sports aircraft. The ice race was launched in 1929 by the Freiburg motorcycle club in cooperation with the Titisee spa association. Impressed by the response, the ADAC participated in the organization of the event with great success in the following years. In bright sunshine, the bystanders gathered in their thousands and in 1934 around 15,000 spectators came from Baden, Württemberg and Alsace. 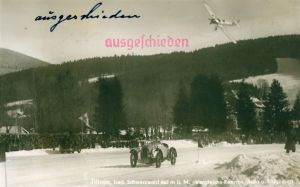 Highlight were the races with cars and motorcycles against airplanes (Foto: Stadtarchiv Titisee-Neustadt 260 201)

The organizers demanded 10 Reichsmarks for the participation fee in the race and an overnight stay with breakfast. The visitors were day visitors and also weekend travelers. Vehicles equipped with nailed tires were necessary to drive on the icy racetrack. Together with the roaring engines, they made a hell of a noise on the ice. The exciting competitions became increasingly dramatic and created a heated atmosphere among the spectators. The pilots flew daring maneuvers along the ice runway with their fighter pilots just above the heads of the onlookers. The undisputed highlight was the spectacular show race between cars, motorcycles and airplanes. During the competition, there were separate rules for each type of locomotion. The sports pilots were supposed to complete seven laps around the Titisee at a low altitude, four and a half for the car and three laps on the smooth lake surface with the motorcycle.

The race full of thrills was won by motorcyclist Roth, who had previously impressed with his performance in two-wheel races. Another winner of the international ice races on the Titisee and probably one of the most famous stunt pilots of this era was Ernst Udet with his double-decker. In the comparison competition, he delivered a crazy chase with a racing car. Even outside of the race, the former fighter pilot caused a sensation with extremely risky aerobatics. The motorsport event was one of the most popular winter events in the Black Forest until 1935, but was no longer held afterwards. From June 1926, Deutsche Luft Hansa AG, later Lufthansa, flew daily except Sundays from various cities via Stuttgart to Freiburg. In the 1929/1930 season, the Stuttgart-Freiburg route was one of the most frequently flown routes in the German Reich, as it saved considerable time compared to the train and cost only a little more at 25 Reichsmarks. As a result, the Black Forest was only a stone's throw away for the city dwellers, which stimulated travel. For the tourists, Lufthansa also offered sightseeing flights over the Feldberg area and the southern Black Forest. In winter, take-off and landing took place on the frozen Titisee, which thus became an improvised airfield.

Today the idyllic Titisee, located at an altitude of 800 meters, attracts up to 2 million visitors a year even without winter events. Instead of fast means of transport, now hikers, pedestrians and ice skaters cavort on the frozen Titisee in the Black Forest - if the winter is cold enough.