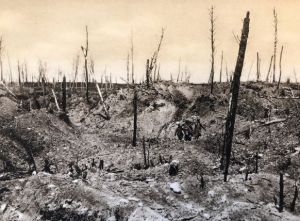 The silent black and white film in 16mm format, shot in 1927, documents a family trip to France with two young children. After swimming in the Moselle, the film shows the front of the Notre-Dame Cathedral in Laon and visits to German and French war graves on the Chemin des Dames.

The first 44 seconds of the film show two women and a child bathing in the French Moselle. The women wear bathing suits and hats while the boy is naked. The child looks dissatisfied into the camera when one of the women comes into the picture and dips him backwards into the water. Then both leave the Moselle and join the family. In the next sequence, the boy kisses a baby lying on a blanket several times on the face. The second motif is 77 seconds long and shows views of Notre-Dame Cathedral in Laon. The camera is rotated by hand without a tripod. She pans the front of the cathedral from bottom to top several times, changing the exposure. This is why one setting is darker than the first few sequences. The third part of the film lasts 2:09 minutes and shows the war graves from the First World War on the Chemin des Dames. The thousands of black and white crosses standing there give an idea of ​​the devastating brutality of the battle and the high number of fallen soldiers. The filmmaker records the war graves from the center of the cemetery by rotating once 360 ​​degrees. 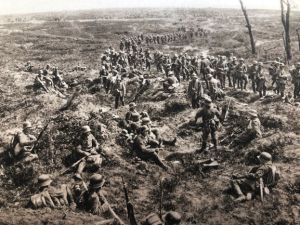 The early Gothic Notre-Dame Cathedral of Laon was built within eighty years from 1155. Its five-tower architecture makes this Gothic house of worship a masterpiece of its time. Together with the Notre-Dame Cathedral in Paris, it served as a model for northern French construction in the 13th century: the cathedrals of Reims and Chartres followed this tradition. The recordings focus on the front with the towers and the rose window with a glass window in nine parts, which represents the seven liberal arts and medicine.

With the battles of Verdun, Agonne, la Somme and Ypres, the Chemin des Dames is one of the most important battlefields of the First World War. After three years of hopeless war, the Commander-in-Chief of the French Army, Robert Nivelle, decided to launch a decisive offensive on the western front near Chemin des Dames in the spring of 1917. At the same time, on the German side, General Erich von Ludendorff ordered his troops to retreat strategically from the front to secure the Siegfried line. The French General Staff sees the retreat as evidence of the enemy's weakness, without realizing that Nivelle is sending his soldiers into a devastating defeat. The infantry attack on April 16 and 17 turns into a bloody defeat for the French, who are mowed down by the German machine guns. This failed offensive cost Robert Nivelle his place at the head of the French army. It was not until mid-September 1918 that the French, with the help of Italian soldiers, succeed in regaining control of the Chemin des Dames. Between October 11 and 13, 1918, the cities of Cerny, Soupir, Braye-en-Laonnois and Laon were liberated. This ended the fighting at the Chemin des Dames, which went down in history as a defeat on the French side. The numbers speak for themselves: In total, the French have 17,000 dead, 20,000 missing and 65,000 injured. On the German side, the losses are estimated at a total of 35,000 soldiers. 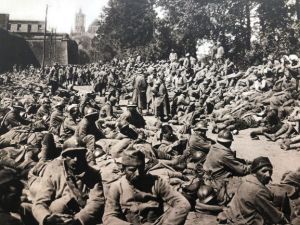 French prisoners of war in the Laon citadel in the spring of 1918 (Foto: Kriegs-Bild und Filmamt)

On the Chemin des Dames and the region around Laon there are fourteen French, nine German, five British cemeteries as well as one American, one Danish and one Italian. The German cemeteries are looked after and maintained by the 'Volksbund Deutsche Kriegsgräberfürsorge'. Rows of black crosses can be seen in the film, pointing to German graves. However, the cemetery cannot be precisely located. For example, a German cemetery in Laon is 'Bousson', which was established by the Germans between 1914 and 1918. There are 2,653 soldiers in individual graves with black crosses. Most of these soldiers died in the battles of the Chemin des Dames in 1917 and 1918. The 'Champ de Maneuver' cemetery was the final resting place for 3,487 fallen German soldiers from 1920 onwards and was built by the French authorities. There are 3,295 individual graves and 193 are in an ossuary because the skeletons could not be assigned to any person. The German military hospital was still in service until 1920, especially for the soldiers who could not be transported. White crosses can also be seen in the film, presumably for French graves. An example of this is the Pontavert cemetery, which was established around 1915 and where 6,815 soldiers are buried. The short film is a haunting reminder of the many victims of the First World War.