Impressions from Baden-Baden and the National Theatre in Mannheim 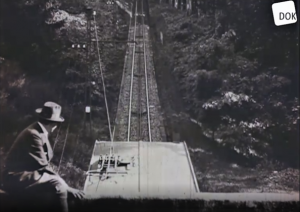 The tram to the Merkurberg from an original perspective (Foto: LFS)

The film "Do you know your homeland?", which was shot around 1920 in 16 mm format, shows various cities in the southwest. The scenes are introduced with professionally designed titles that are viraged in color. This technique of coloring the black and white material was intended to increase its attractiveness and is considered to be the forerunner of color film, which did not gain acceptance until the late 1930s. In the Kinemathek Oberrhein you can see the excerpt from Baden-Baden and Mannheim. The silent movie was shot on a tripod, so the recordings are pretty stable.

The film begins with the blue-tinted title “From the plethora of attractions around Baden-Baden, a ride on the cable car to the 700 meter high Merkurberg is one of the most appealing”, followed by the title “View of the train station”. The first shot shows the electrically powered tram arriving at the Merkurbergbahn valley station. The connection from the center of Baden-Baden to the Merkurbergbahn station was established in 1912. For cost reasons, the trams were replaced by omnibuses around 1950. The film then shows the ride on the mountain railway. First the departing train is picked up from the valley station, then the valley station from the departing train. The Merkurbergbahn is a funicular that transported passengers from the tram stop to the top of the 657 m high Merkur mountain. 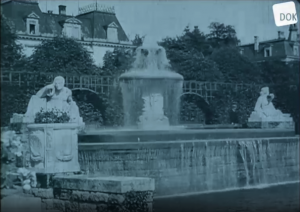 The shots from the Josephinen fountain are tinted in blue (Foto: LFS)

Baden-Baden established itself as a spa town for international guests in the 19th century. With the establishment of hiking trails, the casino, sports facilities for tennis and golf and the racecourse in Iffezheim, efforts were made to offer its spa guests something special. Many visitors came from France because gambling was banned there from 1883 on. Already at the end of the 19th century there was a lot of competition between spa towns. As a result, the Merkurbergbahn, which had been planned since 1876, was opened in 1913 as a new attraction for spa guests and day tourists in Baden-Baden.

In the film, the point of intersection in the middle of the route, where the lanes going up and down meet, is highlighted as a special feature. An intermediate cut shows a man on a bridge under which the train passes. This is followed by recordings of the terminus on the Merkurberg. During the Second World War, the Merkurberg was used for air surveillance and the railway was only allowed to be used by soldiers. It was damaged in attacks by the French artillery. The Merkurbahn has remained a tourist attraction to this day. 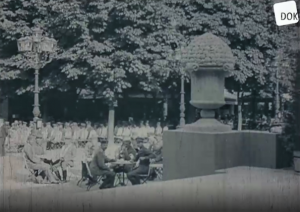 Soldiers have taken their seats in the spa gardens (Foto: LFS)

The green-colored title "Baden-Baden in the Black Forest", which should have belonged at the beginning, is followed by a purple title "View of Baden-Baden from the old castle". The setting is aesthetically designed with trees framed on the left and above. This also applies to the next shot of the old castle (Hohenbaden Castle), where an elegantly dressed lady with a white hat is placed in the picture before the camera pans to the left over the ruins. The castle was built around 1100 and served as the seat of the Margraves of Baden until it was replaced by the new castle in 1479. In 1599 it was destroyed by fire. From 1830 the ruins were secured, catwalks were set up and thus became a tourist attraction. 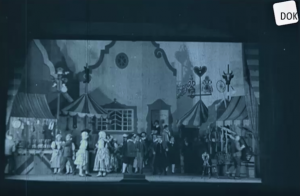 The recordings from the Mannheim National Theater are also colored in a blue tone (Foto: LFS)

The purple-colored title "Park Motive" leads to the Oos and the patronage facility, which was donated by the German-American coffee king Hermann Sielcken. The facility was opened in 1909 and named after the former Lord Mayor Albert Gönner. In addition to the hedge structure, the complex has the central Josephine Fountain, which was designed by the Munich sculptor Joseph Flossmann and named after its founder, Josephine Sielcken. The photos of the fountain are colored blue. A couple is flirting on a park bench and the man kisses the woman's fingers. A short sequence follows on the forecourt of the Kurhaus. Soldiers in uniform sit at the tables. The casino and a restaurant are located in the Kurhaus. The interior design was modeled on Versailles. It was built in three phases in the 19th century to replace the promenade house, which was too small and where gambling was already taking place.

The light blue title “Behind the Scenes” leads to the Mannheim National Theater, where the stage is converted from a room into a fair between the first and second acts of the opera “Martha” by the composer Friedrich von Flotow. Scenes from the auditorium are recorded in a long shot and colored light blue. Since 1777 there have been performances in the National Theater. On September 5, 1943, it was completely destroyed by a British bombing raid. At the end of the film you can briefly see the ceiling of the library in the Baroque Palace in Mannheim, with the first shot upside down. The castle was built between 1720 and 1760 and served as the residence of the Electors of the Palatinate until 1777. The ceiling painting was created by Lambert Krahe and symbolizes the victory of science. The castle was significantly destroyed in World War II; the library was best preserved.