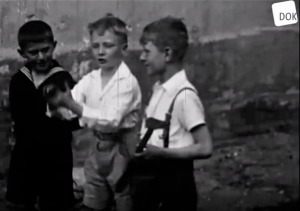 In the two-minute black and white film shot in 16mm format, Katharina and Emil Lind document the wild game of their eight-year-old son Walter and his friends in 1934. The film consists of nine sequences that show various activities, some of which were safely staged and agreed for the recordings. The film begins with the handwritten title “Indian, Walter is 8 years old”. The first scene shows four children playing outside in the garden. They built something like a castle out of old furniture and bricks. One child is wearing a sailor suit, Walter is wearing leather pants with suspenders. Next, five children run one behind the other towards the camera. In the background a woman is watching the scene from a window. Then Walter and a friend climb a tree right by the house. The five children walk one behind the other in single file and are picked up from the side. Walter can then be seen in a close-up and talks to the person operating the camera. He is then taken in his arms first by his father, then by his mother. One of the boys tries to balance on a railing. Two of the boys fight with a stick, while the others use their fists in hand-to-hand combat. Some of them go down. 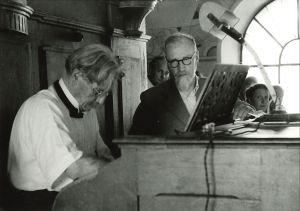 This private film by the Lind family can be viewed as a historical source for social and micro history. It was filmed as part of a family visit to the paternal grandparents in Schwegenheim. Eight-year-old Walter uses his games to show topics of education, the social, mental and family situation in 1934. The Germans experienced major political changes after the Nazis came to power the year before, which initially seem to have little effect on these raging children. The film does not deal with highly political events, but rather the everyday life and social circumstances of a pastor's family in the 1930s. The fact that such a children's play scene could be filmed shows a high social status. The family had to have a camera, which, like the footage, was still very expensive at the time. The father Emil Lind had a pastor's office in Speyer since October 1925, which is not insignificant for a Protestant pastor, as Speyer is one of the birthplaces of Protestantism. Lind, field chaplain during the First World War, was the main organizer of the 400th anniversary of the Protestation in Speyer, which in 1529 meant the recognition of the Protestant minority. He was a former student and friend of Albert Schweitzer, with whom he had an intensive pen friendship from 1929. He wrote a biography about his teacher and friend. Lind published the monthly magazine “Der Speyerer Protestant” and thus had a regional influence. The father's path in life unfolded on the local level of the Rhineland, where he was born in Schwegenheim, studied theology in Strasbourg and worked in Speyer. Emil Lind corresponds to the typical private filmmaker, but was also one of the most prominent Palatinate pastors in the 20th century. He embodied the liberal current of Protestantism. 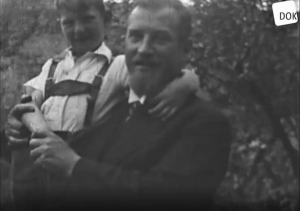 Emil Lind with his son on his arms (Foto: LFS)

The film images reveal the boys' everyday life with their clothing and certain behaviors. A boy wears a sailor suit that was common in the 1920s. The suit was developed in the 19th century and was also used as a school uniform. Between 1880 and 1930 it was widespread across Europe and manufacturers like Bleyle made it their flagship product. The National Socialists rejected him as a decadent bourgeoisie. In contrast to the sailor suit, the leather pants for boys remained popular for a long time because they were resistant to play thanks to the solid material. With the emergence of alpine tourism after the First World War, the leather shorts developed and spread outside the Bavarian and Alpine regions. In the case of Walter Lind, we can assume that it was a gift from his grandfather from the Swiss Alpine region, which is mentioned in another recording of the Lind family (see: "Familien Film Teil 1").

As far as behavior is concerned, one observes freedom of play and of the children's relationship with their parents. As part of this family constellation, little Walter seems free and emotionally close to his parents. Such a closeness is later no longer possible due to the compulsory membership in the Hitler Youth and other NS youth organizations. Because it's about drill, obedience and paramilitary training. This scene of the everyday life of a German boy represents the last moments of freedom of a young generation that has not yet been taken over by the National Socialists. Another film shows Walter in a Hitler Youth uniform (see: "Familien Film 3c"), who walks loosely towards the camera and picks flowers in the front yard. The film "Raging Children" shows the educational models of this time for boys who are encouraged to express their masculinity freely, through shouting and virile or combative games.