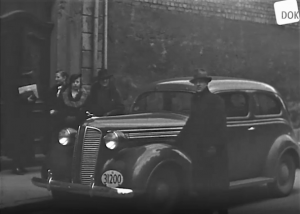 Back then the car was a symbol of prosperity (Photo: LFS)

The silent black and white film with a length of just under six minutes was shot in 1937, as Agfa's initial logo with the year reveals. You can see the everyday life and excursions of the Lind family in the region around Speyer, where father Dr. Emil Lind worked as a pastor. The first sequence shows impressions from winter. A boy is sledding down a small hill and building a snowman in the front yard of the house. He wears a peaked cap typical of the Wehrmacht, with a cockade in the national colors and the imperial eagle. The snowman is inspected by a young woman and a young man and decorated with pieces of coal. The three then begin a wild snowball fight. In the next sequence, a younger couple walks through the wintry Dompark in Speyer with the Heideturmchen, which was built in the 13th century. 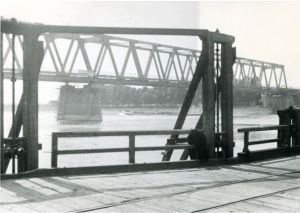 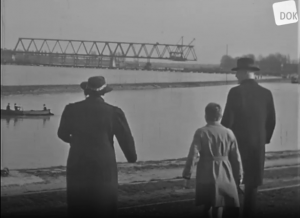 Excursion to the Rhine with the construction of the Salier Bridge in the background (Foto: LFS)

Then the family goes on a trip to the Rhine. In the foreground, Walter is walking with his grandparents in smart Sunday clothes and with a camera around his neck. In the harbor basin, three people row in a boat. In the background you can see the new Salier Bridge near Speyer, a combined road and rail bridge. It was opened in 1938 and replaced the previously operated pontoon bridge (see film “Pontoon bridge and new Rhine bridge near Maxau”). The new steel bridge was blown up on March 23, 1945 by German soldiers retreating. The family continues along the Rhine, past an older paddle steamer.The next shot shows the family and another couple at the Fürstenberg monument in Baden-Baden, which is on the Hungerberg above the new castle. It was built by Carl Egon, the 3rd Prince of Fürstenberg, out of gratitude because his son survived a fall from his horse in 1862. The family then goes for a walk in the famous Lichtentaler Allee along the Oos. The next photos show houses that are located on Annaberg in Baden-Baden. Then you can see the family in the inner courtyard of the new palace, where besides them there are other passers-by admiring the beautiful architecture. You move in the direction of the panorama balcony on the Schlossstaffel, from which you have a wonderful view over Baden-Baden, which is then also shown. Baden-Baden had developed into one of the most important thermal bathing resorts in Europe in the 19th century. In order to meet the demands of international spa guests, Baden-Baden set up leisure activities such as golf and tennis courts, thermal baths and the racetrack, which shaped the cityscape over the long term. In the next scene, several people are standing around the heron fountain, where they are rinsing their bottles. The thermal water flowing in the fountain had a temperature of over 40 degrees, which made it a tourist attraction. At that time, the fountain was level with Sonnenplatz and was moved to Sophienstrasse in 1966. Many people stroll along the magnificent Kurhaus, which has long been used as a casino and is decorated with swastika flags. The family walks from the Kurhaus via Lichtentaler Allee to the patron complex, which is known for its imposing fountains and plants. The Evangelical City Church could only be inaugurated in 1867 through donations and after the establishment of a foundation. The following photos show the city center at Leopoldsplatz. The final shot shows the Baden-Baden theater, which is located next to the Kurhaus on Goetheplatz. The theater was built by the then casino leaseholder Edouard Bénazet and opened in August 1862. Most of the sights shown have been preserved in the spa town to this day. They shape the cityscape of Baden-Baden and are still attractions for tourists and day visitors.