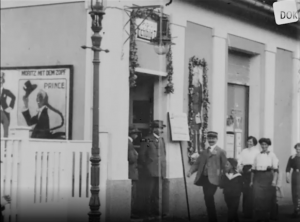 One of the oldest films about a gymnastics festival has survived from Gaggenau, with the film sequences dating from different years between 1913 and around 1928. The film initially show the local Apollo cinema in Bergmannstrasse, which was opened by Mr. Dinges in 1912. The dating took place via the cinema poster for the film "Moritz mit dem Zopf" from 1913. The French comedian Charles Prince worked for Pathè from 1908. In France he became a star of early cinema with the character 'Rigadin' (German: Moritz) and between 1909 and 1920 more than 500 short films with this character were published (Schoenmakers 2008, p. 496). It is quite possible that the recordings of the Turnerfest 1913 were made as a local recording on behalf of the cinema owner, because in the early days this was a method to lure the audience into the cinema. 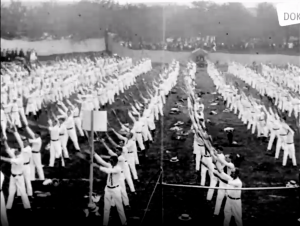 The gymnasts were staged as an ornament to the crowd (Foto: LFS)

The next subject shows the Mercury Bridge over the Murg, which was inaugurated in 1923. A banner 'Give work' hangs on the bridge. This political demand can be explained by the hyperinflation and economic crisis of 1923. Because actually Gaggenau, a place with 3,111 inhabitants (1910), developed into one of the industrial centers in the Murg Valley. Over 3,000 people worked in the ironworks, in the car factory and other companies (Turnerbund 2007, p. 32) and Gaggenau had a large group of workers. Many of them were members of the Turnerbund, which built the Jahnturnhalle, which can be seen in the next picture, in 1926 with a lot of personal work from its members. It was completely destroyed in an air raid in 1944, including the club archive. The next recordings show a well-attended soccer game that unfortunately cannot be dated. Onlookers outside the sports field use makeshift platforms to watch the game.

A title "Gauturnfest Gaggenau (Baden)" leads over to the main subject of the film about the Gauturnfest of the Turngau Murgtal, which was organized on August 10, 1913 by the Turnerbund Gaggenau 1882 e.V. The pageant marches through the city center. The film crew recorded them in Adlerstrasse, with the portal of the Catholic St. Joseph Church in the background. It's raining and the audience on the street has opened their umbrellas. That is why the flags of the various clubs in the area are rolled up. But first of all they have signs with the place name, which can only be partially read. The film does not show the pageant continuously, but the footage jump from group to group. With this method, the scarce film material in the magazine could be used efficiently. Because if the cameraman had to put in new footage, he was missing something from the event. In total there were over 40 gymnastics clubs in the Turngau Mittelbaden-Murgtal in 1913. The oldest were the Rastatter Turnverein 1846 e.V., the Turnverein Bühl 1847 e.V. and the Turnverein von 1849 Gernsbach e.V. The others were founded between 1882 and 1912.

The Turnerbund was able to inaugurate the Jahnturnhalle in 1926 (Foto: Stadtarchiv Gaggenau)

In the film, a title informs that the mayor welcomes the gymnasts. He stands at the laurel-decorated lectern amidst the dignitaries of the clubs. “800 gymnasts perform a complete exercise (club swinging)” can be read on the next title. The gymnasts have lined up on the sports field and swing their clubs almost synchronously. They are recorded in a long shot. All are dressed in the same way with long white trousers with a dark belt, white shirt and tie. At the end of the report on the gymnastics festival, the ladies of the Gymnastics Association Gaggenau do gymnastics on parallel bars in bloomers, sailor blouses and stockings, "so as not to endanger 'morality'" (Turnerbund 2007, p. 32) founded and was not yet a matter of course. In 1929, Gaggenau organized the 2nd Baden regional women's gymnastics with around 2,500 participants from all 15 Baden gymnastics districts (Turnerbund Gaggenau 2007, p. 38). Here too, in addition to the sporting competitions, there was a parade through the city and a large exhibition gymnastics on the fairground. In the Weimar Republic, physical activities by women were recognized. "But when women went public and wanted to take part in competitions, violent discussions arose about the physical and psychological suitability of the female sex, about the aesthetic evaluation and, last but not least, the moral consequences." (Pfister and Langenfeld 1982, p. 979) A well-trained body could damage femininity, as it would make you half men, so the polemical arguments against women's sport. The church argued that there was a threat to morality. Therefore, the recordings from Gaggenau are an important testimony to the beginnings of women’s sport in the southwest as well.