Sports festival in Gaggenau under the sign of the swastika 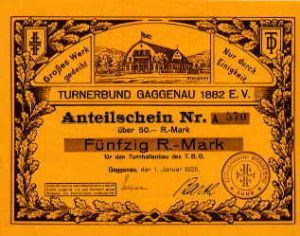 The construction of the Jahnturnhalle was also financed through the sale of share certificates (Foto: Stadtarchiv Gaggenau)

From 28.-29. August 1937, the 1st district sport meeting of the Murgtal and Oos districts takes place in Gaggenau. These two days are comprehensively documented on film. The central locations are the Jahnturnhalle, which the Gaggenau Gymnastics Association built in a lot of its own work and was able to inaugurate it in 1926, and the sports field in front of the hall. This was completely destroyed in an air raid in 1944, including the club archive.

The sports area was taken over by National Socialists. A decree stipulated that "in order to maintain uniformity in physical exercises and in the interest of a planned athletic training of the youth, the leadership in the sporting field is entirely the responsibility of the Reich Sports Leader appointed with his consent by the Reich Minister of the Interior" (Turnerbund Gaggenau 2007, p. 42 ). The new 'Reichssportkommissar' Hans von Tschammer und Osten was able to redesign the association and organizational structures as early as the end of May 1933 and set up a 'Reichsführerring', "to which the 15 (later 16) representatives of the new professional associations belonged under his chairmanship" (Joch 1982, p . 722). Only they had the right to organize championships and other events such as the gymnastics festival in Gaggenau. Both the Workers' Gymnastics and Sports Federation and the denominational sports organizations were smashed. Jewish athletes were excluded from the clubs. The realignment of the sports associations to the new political conditions was implemented immediately. 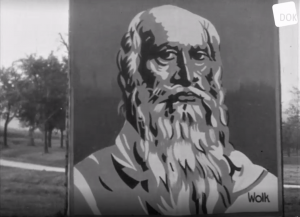 At the edge of the sports field, gymnastics father Jahn is remembered (Foto: LFS)

Nevertheless, the gymnastics festival in Gaggenau seems very civil. The speeches shown in the film are given by men in civilian clothes and there are no Nazi officials in uniform on stage. This is noticeable, for example, in comparison to the film “Sportfest in Karlsruhe”, which, however, also deals with the SA sports badge. The film begins with flags in front of the Jahnsporthalle. A swivel shows the fair booth, and between the waffle bakery and the ice cream stand, a “Wehrsport” booth can be clearly seen, which is probably a shooting gallery. The women in short, sporty dress who perform dance and gymnastics exercises in front of the Jahnhalle are somewhat underexposed. The women's team can celebrate its 25th anniversary because it was launched in 1912 (see film “Turnfest Gaggenau 1913”). That's why they have a noticeable presence in this film. You can see them marching and a woman with documents in hand coordinates the competitions. The sports field is decorated with swastika flags. A title informs: “1. District meeting in Gaggenau 28.-29. August 37; Fachamt Turnen Kreis 6 “ and enables the event to be dated. The next shot shows a long shot of the sports field with various gymnastics exercises on the horizontal bar, horse, beam, etc. A man in white gives a speech. Then you see the women's squad again in front of the Jahnhalle, in front of them a woman is swinging two clubs. Another is balanced on a beam. This is followed by shots from Lahr with a bridge and a church. A group of athletes is running on the street. A close-up shows the drawn portrait of gymnastics father Jahn, which is signed 'Wolk' and stands next to the sports field. A group in civilian clothes runs through a triumphal arch decorated with green and with three huge swastika flags. 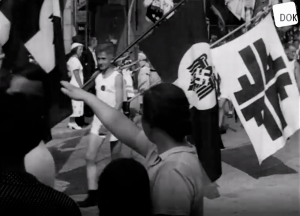 At the parade through Gaggenau, you can feel the appropriation by the National Socialists (Foto: LFS)

Now the parade of the participants on the sports field can be seen with the flags first. They line up and do gymnastics together - an ornament of the masses. You are surrounded by the interested audience. This also applies to moving around town. A woman greets the actors with a Hitler salute and is pulled out of the picture because she is disturbing the filming. She looks astonished into the camera. In addition to the athletes, a music group also marches. The Jahnhalle is adorned with Nazi symbols and another man in a civilian suit gives a speech from the balcony. Then the sports flag with eagle and swastika and a swastika flag are hoisted. The audience greets with a raised arm.

This is followed by shots of another sports field surrounded by trees. Here men are shown in disciplines such as long throw, high jump, races, rope climbing, etc. The next sequence shows dancing women in long white skirts, which are probably taken from the balcony of the Jahnhalle as a long shot. Then they march in order from the square. A soccer game can be seen briefly before one more footage of the move. A little underexposed in cloudy weather, another parade of athletes behind flags comes into the picture, who are straightening up and starting with common gymnastics. The organizing team can be seen on stage in glorious sunshine - no one is wearing a uniform. At the end, the women's squad presented gymnastics exercises with balls and sticks in front of the Jahnhalle, and fencers offer exhibition matches. If one compares this film with the 1913 Gymnastics Festival, it becomes clear that the gymnasts remained true to their traditions despite being taken over by the National Socialists.