Bus tour to the Swiss cities of Brugg and Bern 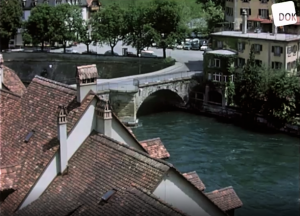 View from the old town of Brugg on the river Aare (Foto: LFS)

The silent color film in Super 8 format shows a bus excursion by the Villingen-Schwennigen municipal council to the Swiss cities of Brugg and Bern. They made trips to neighboring countries regularly and have documented this on film (see flm : "Informationsfahrt Gemeinderat von 1962"). The current film is from 1963 and begins with the departure in front of the town hall in Villingen-Schwennigen. Participants come with suitcases, which they stow down in the bus. The picture was taken at an angle, an expressionist aesthetic that surprises for such an 'official' film and is no longer taken up in the film.

This is followed by impressions from Brugg with a busy street, old houses and a hand-painted advertising sign for the specialty “Brustspitzli”, ½ kg for 2.80 francs. This specialty is a boiled or grilled pork breast, which is heartily filled with vegetables and potatoes. The camera perspective changes again and again, the pictures are rotated by hand and are therefore a bit restless. The focus is initially on the city of Brugg. Then the river Aare is recorded and the Black Tower, the symbol of the city. After its construction in the 12th century, the tower castle was inhabited for years by Count Albrecht III. by Habsburg. The building has served as a district prison since 1846. The delegation is shown in front of a map of Brugg and in a restaurant with a terrace, where a speech is given. The men wear suits, ties and often black sunglasses, the women smart costumes. This is in keeping with the style of the time and would have allowed an approximate dating of the material had the exact year of production not been known. Then the delegation descends a staircase, so that the people involved in the trip can be seen more closely. 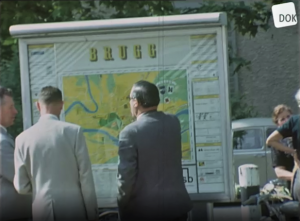 Participants of the travel before a city map of Brugg (Foto: LFS)

The next stop is Bern, which is filmed from different angles. In the following sequence, a brown bear is filmed in the enclosure, which stands up and stands on both of its hind legs. Four bears beg the audience for something to eat. From a bridge there is a view of the old houses on the river Aare and of backyards. This is followed by shots from the old town of Bern with the Kramgasse, through which the traffic still flows, with its famous arcades and the late Gothic cathedral. You can see the historic town hall with an imposing staircase and the monument of a knight with a flag of the Bernese coat of arms with a black bear and the final image is a fountain with a small obelisk. 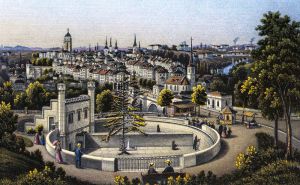 The famous bear pit in Bern around 1880 (Quelle: Public Domain)

In the almost four-minute amateur film, a delegation from the Villingen-Schweningen municipal council travels to Switzerland with the bus company 'Maier Reisen'. The company, which has existed since 1923, originally was specialized in the transport of milk and milk products only. This changed in 1933 when a truck with a seat structure was bought to transport people for the first time. Over the years, the company expanded and built a large company that offers travel both domestically and abroad. In addition to the sights of the cities and photos taken by the delegation, the film also repeatedly shows photos from nature, with meadows, forests, hills and rivers.

The 1960s were a real boom for both the city and the canton of Bern and the zoo has made a significant contribution to this. With an animal population of 1,675 animals in 335 species, the zoo has been one of Bern's flagships since 1954. However, this private film does not show the zoo, but the Bern Bear Pit, which is also an attraction of the city. You can see the fourth bear pit, which was opened in 1857 in the eastern part of the old town at the Nydeggbrücke. In the bear pit, the bears were allowed to run freely, but animal rights activists criticized the unsuitable keeping. Therefore, in 2009 a new bear park was opened to the public directly on the banks of the Aare, which allows much larger exercise.

The city of Bern has been closely associated with bears since it was founded and has chosen them as their heraldic animal. That is why the motif of the black bear in front of a golden background can be found on flags, fountains and buildings all over the city. Last but not least, the 'Vennerbrunnen' on the town hall square in Bern is shown. The Venner had the duties of a quarter master. They were therefore responsible for the harness show, tax collection, market supervision and the fire brigade in a city. In the Middle Ages, the four Venners in Bern were provided by the bakers, the blacksmiths, the butchers and the tanners. The Vennerbrunnen is one of Bern's old town fountains from the 16th century. The fountain figure, a Venner, an armored Bernese standard bearer, is only a copy. The original is in the Bern Historical Museum.