Pan across sports field: grandstand, formations of the SA; SA marches across bridge; Man in SA uniform; Church and chapel <not identified>; Man in SA uniform on wooden horse; Move through Freiburg, members of the SA on the roadside; marching SA, youngsters on the roadside; Lunch in the inn 'Zur Krone'; Boy with bread; SA men on trucks, shot during driving; SA in front of the Freiburg Minster; Poster 'Dr. Goebbels'; March through Freiburg, SA on sports field; Goebbels in a light coat walks off the front of honor; SA and HJ on the sports field; Man is carried on stretcher from the place; Boys playing in the grass; Hitler salute; Speaker's stand with swastika flags;

Poster motif 'Hermann Göring speaks on Friday May 10th ... in the Festhalle Freiburg i. Br. '; SA marches through Freiburg, women in traditional costume of the Markgräflerland, greeting guests of honor; limousine with Hermann Göring drives up, greeting, Emmy Göring in the limousine with a bouquet of flowers; guests' cars drive through Freiburg in convoys, spectators on the side of the road; moving through Freiburg: SA, student union, HJ, BDM, Marine-HJ, SS and others; Police officers in front of the Freiburg town hall, SS men in limousines, moving through Freiburg city center; Parade in the market place, limousines pull up, Goering walks in white uniform down the front of honor, gets back in limousine, limousine drives off, spectators on the roadside, Hitler salute; Spectators in front of the Freiburg town hall, police officers march off; Swivel over terrace, limousines and. Guests in front of the Schauinsland mountain station, man with bouquets of flowers, Göring comes from the mountain station; Hermann Göring (white uniform and white coat) surrounded by men in uniform on the way, goes back to the mountain station;

Crowd in Freiburg, police officers u. BDM girls hold back the crowd; Hotel "Europäischer Hof" (not preserved; today high-rise building of the Dresdner Bank); Crowd in front of the Festhalle, limousine with Goering drives up (dark), Goering goes into the Festhalle;

SA men, spectators on the edge of an airfield, propeller plane with inscription 'Horst Wessel' lands; Welcome to Viktor Lutze, SA chief of staff; Car with a sign in the rear window 'SA march 22-23. August 1936 '; Crowd u. SA in front of Freiburg City Hall, limousines drive up to Münsterplatz, welcome Viktor Lutze accompanied by Mayor Franz Kerber; Goulash Cannon Cooks; Viktor Lutze is greeted in the university arena; Pan over free space with formations of the SA, music band, speech, Hitler salute, spectators; March of the SA in front of the grandstand; Goulash cannon, issue of food, men in SA uniform eat from field dishes; Title: and me / man in SA uniform; Title: I shot / Transparent <Your yes to the guide on April 10th>; SA men probably in front of the university>; SA men drive trucks through Freiburg city center, Martinstor in the background; Column with vehicles on the country road; SA on the street //

The black and white compilation film was shot by the architect and ambitious amateur filmmaker Curt Balke. It shows events in which the SA Brigade 54 (Black Forest South) and other Nazi organizations such as the Hitler Youth, veterans' associations, NS motor corps, as well as fraternities and police marched in Freiburg between 1934 and 1938. In one shot Balke salutes in front of his house in SA uniform and at the end of the film he visibly proudly writes on a blackboard "and I shot it". The recordings of visits by Minister of Propaganda Joseph Goebbels on June 17, 1934 and Reich Minister Hermann Göring on May 10, 1935 in Freiburg are interesting from a historical point of view. 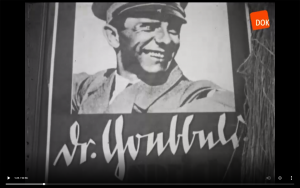 In addition to the staged marches and parades, the film also shows private moments, be it children, women with dogs, a SA man riding a toy horse or the strenuous waiting for the big events. The first recordings include a terrain march through a village, where a stop is made in the "Gasthaus zur Krone". A first highlight is the visit by Joseph Goebbels. The SA standards are deployed on the measuring site or are initially lying in the sun, drinking water. Women run past them. An exhausted person is carried away on a stretcher. Goebbels in the white trench coat takes off the bandages deployed. A newspaper article speaks of 80,000 participants - also from Alsace and Switzerland. Goebels took a continuous positive record of the first year of the Nazi regime and spoke out against critics and political opponents. The audience welcomed the speech with long applause, the newspaper wrotes. 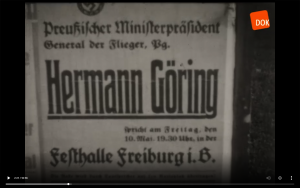 Mobilization was also carried out for Goering (LFS)

In the film, a poster announces Hermann Göring's visit to the Festhalle on May 10, 1935. He was Prime Minister of Prussia and had just been appointed Commander in Chief of the Air Force. He was considered the second most important man in the NS-regime in the population. The newspaper asked to close all shops, businesses and restaurants between 3 p.m. and 5 p.m. to allow everybody to participate; many had traveled from the surrounding area. A triumphal arch with three huge swastika flags had been erected at Komturplatz, because the National Socialists based their public presentation on ancient models. This arch is hardly recognizable in the film. Goering and his new wife Emmy drove up in the Mercedes convertible and were greeted by the local dignitaries of the party and politics. In the audience several young women in traditional Black Forest and Marktgräfler costumes. Goering wore the white summer uniform of the air force. In the car parade it went through the city (Zähringer, Kaiser, Franziskanerstrasse) to the town hall. There he was received by the Baden Prime Minister Walter Köhler and Freiburg Mayor Franz Kerber. Göring assured Gauleiter Robert Wagner and the mayor of the full support of the imperial government for Baden as a 'Grenzmark'. The film shows the arrival and departure of Göring, where he jovially greets the people standing in the car. Children of all schools in Freiburg were also turned off and reacted euphorically. The public's identification with the Nazi regime is clearly expressed in cheers, smiles and hand gestures. Pictures of his trip to the Schlossberg follow. The large-scale rally in the evening at 7.30 p.m. in the Festhalle am Stadtgarten will be broadcast on Karlplatz. There is also a large crowd of BDM girls in the front row. His arrival is too late to allow good shots. In his speech, he scourged the work of the former parties. Hitler had to build the new state out of rubble. Like Goebbels in the previous year, he also turned against the critics, who will not be ignored. 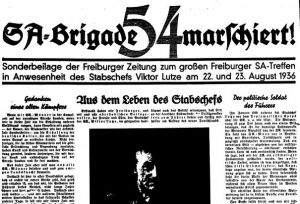 The SA assets were presented in special pages in the Freiburger Zeitung (Universitätsbibliothek Freiburg i.Br.

The third important event in the film is a recording of the SA march on August 22 and 23, to which the Freiburger Zeitung devotes four special pages on SA Brigade 54 on August 22, 1936. The photos show the greeting of SA chief of staff Victor Lutze at the airport, who is then received in the town hall. After the murder of Ernst Röhms in 1934, he became his successor as leader of the SA. This organization had "broken red terror in Germany with its fist" (FBZ, April 22, 1935) and was proud of it. The SA ceremony in the Festhalle on Saturday evening was followed on Sunday morning by the parade line-up of SA Brigade 54 on the University's arena with speeches by Robert Wagner and the guest of honor Victor Lutze. The conclusion of his visit is the march by the 'Party branches' and the SA Brigade 54 in front of him in front of the Rotteck Oberrealschule. In addition to catering in halls and bars in the city, there was also a soup kitchen, which is documented in the film.

The banner "Your yes to the leader on April 10th" probably refers to the 1938 Reichstag election directly after the 'Anschluss' of Austria, in which the NSDAP received 99.1% of the vote. The regime had finally prevailed.