Excursions to the Aachquelle and Lake Constance

Title: Pentecost 1932 / Girl in the garden; Excursion by car, sign 'Aachquelle', bridge over the Aachquelle, man with pimple hood; Meersburg: Old castle; Hersberg Castle; Family in the car; Elderly woman and man in swimsuit, family standing in front of car; View of Wasserburg, map of Wasserburg; Family having lunch on the observation deck of a restaurant; Excursion boat; Family bathing in Lake Constance, children in rowboat, children paddling in barrel, boat dock; Trip by motorboat across Lake Constance; Family says goodbye to older women; Motorcycle with Sidecar; Salem Monastery and Heiligenberg Castle; Couple in a meadow, family eating at the edge of the forest; Messkirch; Girl packs backpack, man cleans car, car is packed; Hike in the Black Forest: waterfall, girls with backpacks in front of a mountain hut, walk through village with chapel <not identified>, family on the meadow (men and girls scuffle), hike on forest paths and through woods, girls knock over rotten trees;

Title; Mausi drives from / 11.9.1935 / girls with suitcases, suitcases are loaded into the car; Title: late summer 1935 / Girl comes out of the house with a backpack and goes on the street; Sign 'Kurort St. Peter'; Training of the BDM in St. Peter: girl goes into a house with a suitcase, girl doing sports and in the room, BDM girls marching on the street, in the background St. Peter. //

This four-minute private film by Curt Balke documents several excursions his family made to sights in the south southwest in the period 1932-1935. The focus is often on his daughter Kati, born in 1920, with her distinctive page cut. Curt Balke can be seen in many of the recordings himself, so he can be recorded by his wife, daughter and others, making filming a family project. 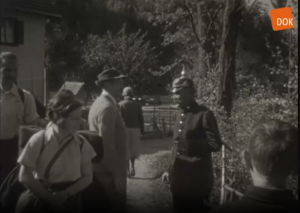 Meeting a man with an old uniform (Foto: LFS)

The inscription "Pentecost 1932" enables the date to be dated to mid-May. The family drives to the Aachquelle, almost 100 kilometers from Freiburg, in an Opel convertible with leather seats. In between, she makes a picnic in a meadow. The Balke family then drives towards Lake Constance, where they visit the Meersburg Castle, the origin of which is a Merovingian royal castle from the 7th century and which is still a crowd puller today. The next stops are Hersberg Castle and Wasserburg, a peninsula in Lake Constance. Lake Constance acts as a heat store and ensures a mild climate there. The family enjoys the sunny weather and stops at the inn. From the terrace she enjoys the view of the lake with passing sailing and passenger ships. At that time the economic focus of the Lake Constance region was mainly on fishing and wine culture. Freshly caught Lake Constance specialties such as whitefish, perch, pike, pikeperch, eel or salmon trout were on the menu. Wine from the region was also offered (Stuhler; Kramer 1983, p. 3). After lunch, swim and row in boats and barrels. In the evening a tour with a motorboat follows. The next day they say goodbye in the quarter and visit Salem with the baroque Stefansfeld Chapel and the Salem Monastery. You can also see the Salem Minster, built in the Middle Ages, the court pharmacy, the adjoining castle wall and the Aach, which flows through the monastery complex. In the autumn of 1802, monastic life in Salem was dissolved when the Margraviate of Baden took over ownership. The cathedral has been the parish church of the Catholic parish since 1808. In agriculture, monastic traditions with agriculture and forestry as well as wine and fruit growing were tied in and modernized. Prince Max von Baden had a trade and business school set up in the monastery in 1906. A boarding school for boys and girls was founded there in 1920: the renowned and internationally known 'Schule Schloss Salem', which still uses a large part of the facility today (Rückert 2018, p. 233). 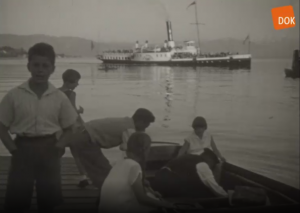 With their convertible, the family drives on to Heiligenberg Castle, a late medieval castle that was converted into a Renaissance castle from 1560 to 1575. From the high plateau 730 meters above Lake Constance, the Balke family can enjoy the view and visit the castle chapel with its intricately carved wooden ceilings. A short sequence then shows Ravensburg with the Obertor, watchtower and some shops in the city center. Then Meßkirch with the late medieval old town and the Catholic parish church of St. Martin are on the program.

The next sequence shows the migration of a group of about ten men, women and young people and their romp in the great outdoors. The inscription "Mausi drives from 09/11/1935" refers to the departure of daughter Kati from Freiburg, who loads the vehicle (Opel Olympia Cabrio) with luggage and sets off for a camp of the Association of German Girls (BDM) in the health resort of St. Peter. There you can see a group of young women, dressed in identical sportswear, doing sport exercises as well as a group of girls marching in lockstep in rows of two. According to the local history of St. Peter, the St. Josef House was misused as the BDM Gauführer School for women in 1935 (St. Peter 2020). 90% of the ten year olds and around 60% of the 10 to 18 year old German children and young people were part of the Hitler Youth, the youth organization of the NSDAP. Half of them were female and belonged to the Association of German Girls. The BDM propagated a modern image of a German girl and ideal of women, initially to provide argumentative support for one's own striving for political power and later to present the political leadership and social control of young women as education (Miller-Kipp 2001, p. 55).

At the beginning of the film in 1932, the NSDAP became the strongest force in the Reichstag elections for the first time with 31 percent in Württemberg and 37 percent in Baden . On January 30, 1933, Adolf Hitler was appointed Reich Chancellor. In the southwest there was dissatisfaction with the Weimar Republic due to the poor economic situation. With 6.2 million, a third of the employees were unemployed (Zentner 2007, p. 274). As an architect, Curt Balke was not affected by this, led a good middle-class life and was able to offer his family a high standard of living. He has a big house, a car and regularly goes on trips and journeys. And he can afford the expensive hobby of filming to document these activities for posterity.