Travel to Braunau and the mountains with a fishing trip 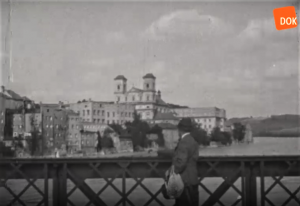 On the way back family Balke make a stop in Passau (Foto: LFS)

The three-minute long silent film, shot in 16mm format and in black and white, deals with a journey by the Freiburg architect and amateur filmmaker Curt Balke and his family to Braunau in 1944. The SA member probably wanted to visit the place of birth of the 'Führer'. It is all the more astonishing that the house where Adolf Hitler was born cannot be seen in the film. It begins with a recording of the cover of the Simbacher Zeitung and the headline “New Raubzug”. The view through the window into the garden follows. A budgie sits on the window handle.

Curt Balke takes his wife Käthe, daughter Kati and a little girl in front of the imposing bridge portal of the Inn Bridge, which connects the cities of Simbach and Braunau. The next shot shows the Balke couple and the girl on the bridge with a view of the Inn. The camera pans across the river to the old town of Braunau in the background, in which the church of St. Stephan protrudes between the houses. A sign is shown on the arch of the bridge “Braunau a. I. Gau Oberdonau ”, after the 'Anschluss' in 1938. In Braunau, the Balke family takes a tour of the streets, filming a wide variety of buildings, including commercial and residential buildings and a shopping street with shops. The family visits St. Stephen's Church and captures the decorated interior with a camera. Balkes stroll along the Inn promenade to enjoy the view of the city. At the end of their visit, the family takes a look at the baroque hall church of St. Paul on the Rindermarkt. 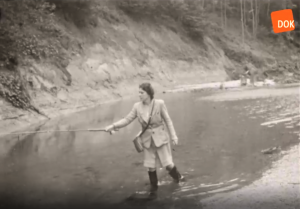 On the excursion they fish in a river (Foto: LFS)

The next sequence shows her visit to Passau, which is about 60 kilometers away and where Hitler's father was transferred in 1892. A sign on Post-Gasse shows the way to “Zum Dom”. Then another sign is filmed: “Reserve-Lazarett bischöfl. Seminar Skt. Stephan Passau ”. Visiting times are indicated below, Sunday, Wednesday and Saturday from 2 p.m. to 5 p.m. Reserve hospitals were set up to meet the increased need for hospital beds during the war. Then the St. Stephen Cathedral and the Prince-Bishop's Residence are the focus from different perspectives. In Passau, too, the family goes for a walk on the Inn promenade outside the city. On a bridge you can enjoy the view of the old town of Passau with the church of St. Michael and the humanistic grammar school, which was founded as a cathedral school. Back in the city center, the Balke family visits the Residenzplatz, which is surrounded by magnificent house facades, and takes in the Wittelsbacher fountain in front of the New Residence. The baroque fountain was created in 1903 to commemorate the hundred years that Passau belonged to Bavaria. The statue of Mary on the high column in the fountain basin depicts Mary as the patroness of Bavaria, the three angel figures below symbolize the three rivers Passau, Danube, Ilz and Inn. 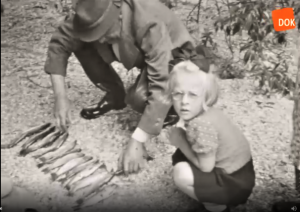 The yield is considerable and is eaten right away(Foto: LFS)

After a few short shots of a shopping street with busy passers-by doing errands and smaller alleys, the Veste Oberhaus is shown. Formerly used as a prison and known as the 'Bastille of Bavaria', the city of Passau took over the castle grounds in 1932 and built a museum. The castle complex is one of the largest preserved of its kind in Europe. In the further course of the excursion, the Balke family takes a break at a river, probably on the Inn. Fishing rods are prepared, cast and fished very successfully. The catch is laid out on the gravel bottom. Curt Balke observes the little girl carefully. The fish are fried in a pan over an open fire and then eaten together at a picnic.

The excursion continues. The family films a place-name sign with information on the distance to nearby places, such as Hochburg, Mattighofen, Braunau and Alt Ötting. The closest is Burghausen an der Salzach, where the family is now drawn. She initially looks at the outer city from a bridge a little further away, the parish church of St. Jakob with its landmark, the almost 80 meter high church tower, with which it is the largest church in Burghausen, is striking. The family briefly visits the city center before going to the castle complex, which is located on a ridge above the city. It consists of five lined up courtyards. With a length of over 1,000 meters, it is the longest castle complex in Europe and one of the longest castles in the world. The family visits the inner courtyard of the main castle with a view of the keep and the outer works. On the long walk over the ridge, you will also pass the castle chapels of St. Elisabeth and St. Maria, the latter also known as Hedwig's Chapel. After visiting the castle, you will stop at a café and explore the place further. In the final scene, a family happily walks out of the door of a family house and walks towards the filmmaker to receive the reception. The film fades out.