Work assignments of old men and young women in agriculture in the war year 1942.

Harvesting vegetables, cereals and potatoes in the area around Lahr, harvesting cabbage in the city park meadow, preparing the soil for sowing and. an acreage in front of the new town hall in Lahr.

On behalf of the city, the Lahr photographer master Eugen Dieterle (1910 - 1983) made this film about agricultural work in 1942, which is partly staged. During the Nazi era, he made several films about events in Lahr and created a series of photos about agricultural work that can be found in the city archive. The film apparently shows a perfectly functioning agriculture in the middle of the Second World War. It shows the sowing and processing until the autumn harvest, which indicates that the film was made between early March and October. It is mainly older men on tractors, people collecting and storing the harvest and many young women and young people who shape the picture. 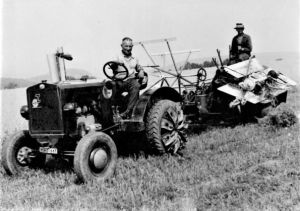 During the Second World War the food supply was important to the NS regime. From the perspective of the National Socialists, the First World War was lost in 1918 due to a starving population. The decline in the people's war morale and the dwindling fighting power of the soldiers were seen as the main cause of the defeat. Nevertheless, the expansion of the defense industry was more important. The production of food was cut back and its consumption rationed. The political goal was to ensure a subsistence level to prevent the system from collapsing again morally and politically. The rationing of food was enacted on August 27, 1939, shortly before the German attack on Poland. From this point on, meat, fat, sugar, jam and other consumer goods such as soap or textiles were only allowed to be purchased with special coupons. From April 1942 there was a drastic cut in the food supply for the population, as fewer slaughterings were carried out and the grain harvest was also poor. Overall, the vegetarian portion of food was doubled in the course of the war. In addition to the harvest of potatoes, cereals and cucumbers, the film also shows a huge field of cabbage. In view of the growing need for vegetables and the limited area of ​​arable land, one was forced to create new acreage. For this reason, the film not only takes place in fields in the Lahr area like Meißenheim, but also directly in the city. There was e.g. a meadow in front of the New Town Hall in Lahr has been converted into arable land. The city park was also used to grow white and cauliflower. 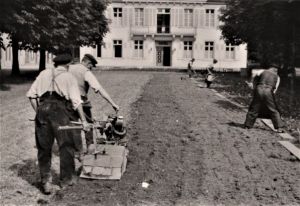 The use of tractors and modern harvesting machines was by no means new territory in agriculture in 1942. They have been used since the middle of the 19th century because industrialization caused a rural exodus that only could be compensated for by mechanizing agriculture. Productivity has been increased in connection with new methods of pest control and fertilization as well as seed improvement. The film shows, among other things, a plow pulled by a tractor, an electric milling drum that can be used to loosen the soil and a combine harvester from the American brand McCormick. Nevertheless, the technical level in agriculture was low compared to industry. There were major deficits, especially in vegetable growing. Older machines that had been imported from abroad before the war could no longer be repaired. At the end of the war, farmers had to switch to manual labor again, and the need for workers had to be met through the use of women, children and also forced labor. The film's impression that the farmers had a wide range of technical harvesters available is only partially in line with reality. 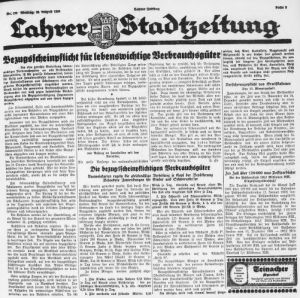 Shortly before the Second World War, purchase certificates for food became mandatory, as the article in the Lahr newspaper wrote on August 28, 1939 (Stadtarchiv Lahr)

Groups of people in agriculture 1942

During the war, many young men were drafted into the Wehrmacht, which is why there was also a shortage of workers in agriculture. For this reason, forced laborers, women, young people and pensioners were used. The film shows an idyll and a perfectly functioning agriculture. The film mainly shows women as well as young and older men who were not recruited for the war. In Lahr in particular, the Mayor Karl Winter also ordered that employees of the city administration be released from military service in order to be used for other war important purposes, which also included agriculture. Although no forced laborers are likely to be seen in the film, they were used frequently until 1942. In 1942, a total of 55,000 foreign forced laborers worked in Baden, 48% of them in agriculture. This shows that the food supply could not be secured without it. Most of the forced laborers came from Poland and the Soviet Union, some also from France; they were often treated inhumane. Due to the labor shortage, many women worked in agriculture. The image of women in the 'Third Reich' was dominated by women as caring mothers and hardworking housewives. Her main task was to give birth to children and to educate them according to the National Socialist view. They were initially pushed out of working life, but were then challenged as workers during the war. At the beginning of the film you can see some young people being driven onto the harvest field by a vehicle with the emblem "Stadt Lahr". Probably these are harvest helpers who were recruited by the city or assigned by the Hitler Youth to agricultural work. The state saw their use primarily as an educational act and as a secondary measure as an economic measure. Due to the labor shortage, all population groups had to help with agricultural work.