Title: Easter 1938 / Travel to Austria / Family in front of the car; Friedrichshafen house with zeppelin fountain; Friedrichshafen harbor on Lake Constance; Lunch in the restaurant; House "Pension Arlberg", Arlberg; Cars on the country road, farmhouses, mountain panorama, driving picture; Window of a farm with swastika flags u. Booklet 'One people, one empire, one leader'; Village street; Driving record on dirt road u. Country road; Innsbruck: Maria-Theresia-Straße in Innsbruck, Hofburg, passers-by in the city center; Matzen Castle in the Inn Valley; Landstrasse am Inn; Girl looks out of the window, panning over rooftops of a mountain village and mountain panorama; Dairy Ellmau (near Kufstein) with swastika flags u. Booklet 'One people, one empire, one leader'; St. Johann in Tirol: Dorfstrasse, women in traditional costume, parish church of St. Johann; Mountain panorama; Cars and tourists on the roadside; Pan over sea <not identified>; Writing tape with swastika flags above a street 'One people, one empire, one leader'; Salzburg: Hohensalzburg Fortress, cathedral, passers-by in the city center; Sign 'Festungsrestaurant Hohen-Salzburg', tour of the Hohensalzburg Fortress, view of Salzburg; Cemetery, cathedral; View of a village on a lake <probably St. Gilgen am Wolfgangsee>; St. Gilgen: house facade with swastika decoration, map of St. Gilgen; Pan across Lake Wolfgang, family on the lake shore; Stop over valley;

Munich: State Opera, residence, temple of honor Ewige Wache at Königsplatz, House of German Art, Odeonsplatz with a view of the Feldherrenhalle; Autobahn on the Drackensteiner Hang; View of Herrenberg, market square in Herrenberg; Farmhouse on the side of the road, driving picture, pan over sea <not identified>; Title: And back home Stechertweg / Garden, pan over house and garage, flowers; young woman with bicycle; Pan over Freiburg; young woman sets breakfast table, family at breakfast; Women in the living room, flower window. //

Immediately after Austria's 'connection' in March 1938, a group of eleven Germans went there with three cars on a tourist trip for Easter holiday. The Freiburg architect Curt Balke documents the trip with his 16 mm-camera. The first stop is Friedrichshafen on Lake Constance with photos of the old town hall with the Zeppelin fountain, which was erected in 1909 in honor of Count Ferdinand von Zeppelin. Graf Zeppelin and his airships are closely linked to Friedrichshafen. The figure of the fountain actually survived both world wars and is now in the city park. After taking a look at the old port entrance with departing ships, the travel company stops in a restaurant. 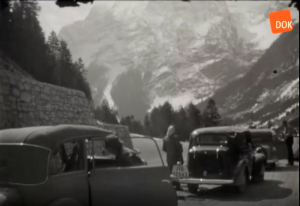 With three cars into the direction of Austria, which just became part of the German Reich (LFS)

The group travels from Lake Constance to Austria, where they drive through wintry mountain landscapes, which are characterized by snow-covered meadows, dense forest on the mountain slopes and idyllic rivers. The route leads through Vorarlberg, Arlberg to Wolfgangsee in the Salzkammergut and finally back home via Munich. With his camera, Balke repeatedly captures wonderful panoramas and idyllic rural and lively urban scenes. The tour company comes through mountain villages and visits Innsbruck with the beautiful old town and Salzburg with the imposing fortress, but also visits highway bridges. The film recordings contrast the poor life situation of the village population with the wealthy visitors from Germany. Because by no means everyone can afford their own car in 1938, let alone a Mercedes-Benz, an Adler-Trumpf Junior Cabrio or a Hanomag Kurier Cabrio. For Balke it was part of everyday life, as numerous films from his trips and travels proof. At the end of the film, he shows his house in Freiburg. The tour group makes no secret of its political disposition; pennants with the NSDAP swastika are clearly attached to the cars. Settings on buildings in Austria show swastika flags and banners: "One nation - one empire - one leader", which clearly relate to the approval of the 'connection'. 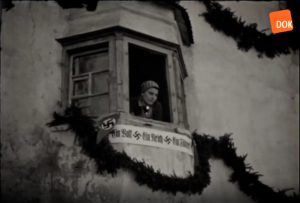 Situation of Austria after the First World War

The Habsburg Empire fell into its individual parts and the Republic of Austria was formed from the German-speaking areas in 1919. Austria-Hungary, along with Germany, is considered to be solely responsible for the First World War and both are obliged to pay high repairs. For economic reasons, many hope that Austria will join the German Empire, which the Versailles Treaty explicitly excludes. The period between 1919 and 1938 was politically very turbulent due to the collapse of poor Austria's Habsburg Empire and in March 1933 led to a dictatorship by Federal Chancellor Engelbert Dollfuss after a parliamentary crisis.

After their seizure of power in 1933, the National Socialists attempted a political coup in Austria in 1934. Chancellor Dollfuss was murdered by Austrian National Socialists in the Federal Chancellery. He is followed by Kurt von Schuschnigg, who hardly differs in his rigid government style. The demand for the reunification of Austria and Germany is growing in the country. In February 1938, Schuschnigg visited Adolf Hitler, who presented him with several demands combined with an ultimatum. Thereupon Schuschnigg announces a referendum on reunification, but he wants to maintain independence. Hitler deployed his troops to the German-Austrian border, increasing the pressure on Schuschnigg, who resignate on March 11, 1938. The referendum does not take place.

At Hitler's request, the National Socialist Arthur Seyss-Inquart was to become the new Chancellor in Austria, but Federal President Wilhelm Miklas refused to appoint him as Schuschnigg's successor. Seyss-Inquart asks Hitler for help and on March 12th he lets his troops march into Austria without any resistance. The Austrian population cheers the German soldiers, the Austrian army joins the Wehrmacht. On March 13, the new Chancellor Arthur Seyss-Inquart signed the law on Austria's "connection" to the German Empire. 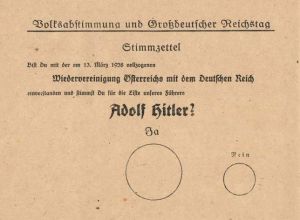 Aleady the design of the ballot paper made clear, which result was wanted by the Nationalsocialists (Public Domain)

"One nation - one empire - one leader"

As early as 1933, the NSDAP advertised the slogan "One nation - one empire - one leader" for the unity of the German nation and the associated exclusion of all those who do not belong to it. In 1938 this slogan served two purposes for the National Socialists. Once in the election campaign for the election to the Greater German Reichstag on April 11, 1938, which is directly linked to the subsequent referendum on the events of March 1938 that led to Austria's 'reunification' with the German Reich. The Nazi dictatorship hopes to be able to achieve a corresponding impression abroad by making the election result as positive as possible. On the other hand, the slogan is increasingly being used by the National Socialists to transfer this idea after the 'Anschluss' in Austria and to swear Germans and Austrians in common history, culture and, above all, glorious future. This battle slogan can be read in the films from Austria.