Equestrian festival in Kurzell with various disciplines and riders in SA uniforms.

ZT: equestrian festival in Kürzell / Entry of the riders in SA uniform in groups of three to five riders. Half-close shot of a rider with a restless horse. View of the grandstand with Nazi officials and guests of honor. Cavaletti demonstration in groups. Jumping single riders. View of the audience; a man shows the Hitler salute. Defile of two-horse carriages. Cross-country jumping; a rider goes with a horse into a river. Award ceremony in front of amazed young people. Obtaining the swastika flag.

The short film focuses on the rider tornement 1936 in Kürzell, close to Lahr, which shows influence of the Nazi regime on the daily life. The participating riders are all in SA uniform, the show ground is decorated with swastika flags. The riders compete against each other in various competitions such as departmental rides, harness racing, hunting jumping and two-horse carriages. Many spectators attend the tournament. Apparently senior uniforms and other guests of honor follow the equestrian festival from a decorated grandstand. A newspaper article in the newspaper of Lahr mentions District Administrator Paul Friedrich Strack, the Mayor of the City of Lahr Karl Winter and head of riding standard 53 Major Hans Bender as additional guests. The award ceremony will take place towards the end of the film. The one and a half minute, silent 16 mm black and white film documents the event authentically. The slightly shaking camera suggests an amateur filmmaker who did not use a tripod. The equestrian festival in Kürzell in 1936 is an example of how politics and the military - recognizable by the symbols of National Socialism - even took part in horse sport competitions. The National Socialists saw sport only as a means to an end, in the sense of training for military service. On December 11, 1934, the riding clubs were brought into line. The clubs were disbanded and reorganized into rider groups called Reitersturm to centralize the activities. The majority of these rider groups adopted the so-called 'Aryan paragraphs', the guiding principle and the 'alignment of the board members'. No great pressure from the National Socialists was necessary for this. If the clubs refused, they threatened to dissolve, the responsible persons were disempowered and replaced by 'loyal' people. 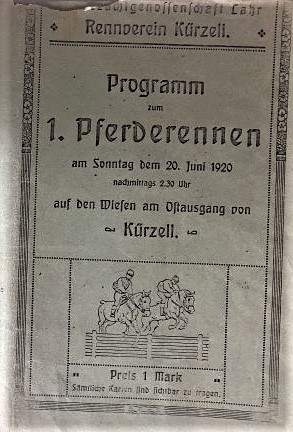 The history of equestrian sport shows how the economic, political and social circumstances at that time had a significant impact on and changed the use of horses. The equestrian sport in the Ortenau has its origins in agricultural horse husbandry and began end of the 19th century. It was linked to the military use and training of horses. After the First World War, the 'Racing Club Kürzell' was founded in 1920, which then organized horse races. In 1922 the establishment of a stallion station became the focus of horse breading in the Rieder region. Numerous breeding, riding, racing and driving clubs were established in South Baden, which were brought into line by the National Socialists to become SA riding groups. In the pre-war period, the members of the previous riding clubs were encouraged to join the SA riders in order to continue to be active in equestrian sports. Pre-military tasks should also prepare young men for military service and military service. From 1934, participation in tournaments, marches and rallies was only allowed in uniform. With an order of March 10, 1936, the National Socialist Equestrian Corps (NSRK) was established as a central umbrella organization. Equestrian events up to 1939 were organized by the SA riding guides, the tournament participants had to be members of the respective SA riding tower. The riders received the trophy when the horse won, and the horse owners usually received the cash prizes. The best riders qualified for the Baden Championships in Iffezheim.

The Kurzell Equestrian Festival was a horse show organized by SA-Reitersturm 5/53 Lahr-Mahlberg under the leadership of Obertruppführer Killius. This Sunday, June 28, 1936 at 2 p.m. around 1,200 spectators and invited guests gathered on the 'old racing meadows' in Kurzell. The 40 tournament participants from SA-Reitersturm 5/53 rode on the best horses in the stable. The prelude was the Badonviller March by Georg Fürst - also known as the Badenweiler March - which Adolf Hitler valued and which thematized a Franco-German battle from the First World War. Following the march of the tournament participants, the SA group leader Fritz Lauffer, who was responsible for the Southwest, hold a speach. In the film, this could be the uniformed man next to a large microphone in the stands, which gives the Hitler salute to the racing meadow as if he wanted to approve the start of the tournament. 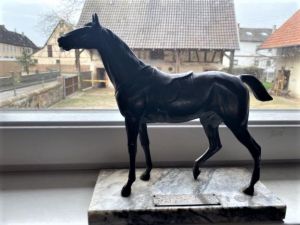 In the film, several disciplines can be seen in short, alternating sequences, including Bodenrick hunting jumping - recognizable by the white wooden poles, which are built to a low hurdle with brackets attached to the ends. The terrain and resourceful ride, in which natural obstacles are overcome, is shown by a rider who directs his horse into the river bed of the Unditz. In addition, the film shows the ancestors of the two-horse team using the Achenbach method to direct the carriages as well as the hunting jumping class A, a not very demanding beginner class. In order to make young spectators, including the Hitler Youth present, particularly happy during the tournament, group rider leader Fritz Lauffer had them hold a 'race' on the tournament field, the winner of which received a reward. 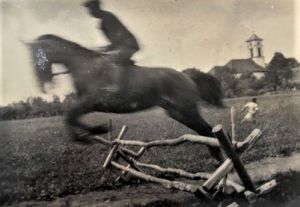 The highlight of the riding tournament was riding on unsaddled horses, which is also not shown in the film. A total of eight riders from the SA rider storm completed this without falling off their horses. At the award ceremony and award ceremony that followed the program on the tournament field, group rider leader Fritz Lauffer presented each winner in the six categories with a special prize - a picture of the leader and the Chancellor Adolf Hitler. One of the winners was Wilhelm Schwärzel and his familiy has still the cup from the tournment 1936. The riders seem to enjoy the attention, which comes as no surprise since many of them were recreational athletes or amateurs and did their civilian jobs or their work in agriculture during the week. In the final scene, the hoisted swastika flag on the stands is overtaken by two uniformed men, which officially ends the festival.