Filmic recordings of American soldiers of the 38th Infantry Division on April 9, 1945 in Bad Fredeburg 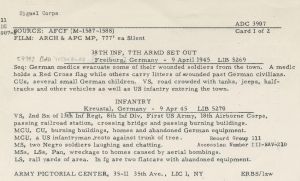 The two-minute short film by the American army provides an insight into the end of the Second World War from the perspective of the American troops. In the American Army, the soldiers responsible for film and photo technology were members of the so-called 'Signal Corps' and part of the advancing troops. They shot on behalf of the Office of War Information, which coordinated US war propaganda from 1942 after the Americans entered the war. The 16mm film "End of War" documents the American advance of the 38th Infantry Regiment with the 7th Infantry Division in Bad Fredeburg in the Sauerland region and also shows destruction, dead and injured. In the National Archives in Washington D.C. you can find the corresponding 'Shot List Card'. Freiburg was erroneously noted as the filming location, but this was corrected by hand in Bad Fredeburg. According to this, this film belongs to a total of three films documenting the events in Kreuztal and Gerhardtsgereuth at the beginning of April 1945. The first part that can be seen here deals with April 9, 1945 in Bad Fredeburg.

In the Second World War, the Sauerland was largely spared from acts of war due to the impassable terrain. The area was bypassed and then had to be conquered by the Americans village by village. The American troops often encountered resistance from SS troops, the Wehrmacht and the 'Volkssturm', in which the last reserve was deployed with old men and half children. Badly trained and almost without ammunition, they confronted the opposing troops and often paid for this with a pointless death. In the event of resistance, the Americans used tanks and, if that was not enough, the US Air Force used air strikes. The air raid requested by the 7th Division began in Schmallenberg on April 7, 1945. 72 German soldiers and 11 civilians lost their lives, 350 soldiers were captured, 37 houses were destroyed and 151 damaged. The conquest of Schmallenberg was very important for the US troops, as the German troops had gathered here with heavy military equipment. 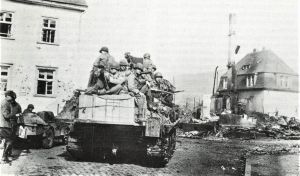 Bad Fredeburg fell a day later after heavy fighting. The city was almost completely destroyed by incendiary and high-explosive bombs by the air force. The film shows the effects of these attacks with many injured and dead again a day later. The place has been taken, there are many injured and dead, and many houses have been destroyed or damaged. At the beginning, a self-made title "Halloran FUSA” is held in the camera. This refers to the First United States Army (FUSA) and presumably the American Halloran Military Hospital in New York, where the Americans' medical personnel could have come from. German medical soldiers with a Red Cross flag stand together with the population, injured soldiers are on stretchers. German civilians crowd around the injured, including some children, who are looking directly into the camera. Two women bend down to a corpse as if to identify him. Wounded are carried out of Fredeburg on stretchers by the German medical soldiers with Red Cross armbands. 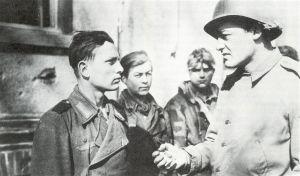 The inscription "Halloran FUSA" can be seen again. American soldiers on a tank drive towards the Church of St. Georg in Fredeburg. More military vehicles followed. There is dust in the air, debris line the street. In the following scene, three nuns with hoods and in medals pass two tanks on the side of the road on which several US soldiers are standing. A tank drives down a village street, one of the soldiers standing on it holds an alcohol bottle in his hand as if he were celebrating victory. Here, too, debris line the roadside, in the background you can see partially destroyed half-timbered houses. Further images show the conquest of the place, which is now under American control. Very young-looking German soldiers are taken away as prisoners. In the final scene, infantry soldiers of the 38th Division march through the streets. The film clearly shows that Fredeburg was almost completely destroyed.

The military end of the Second World War began with one of the greatest landing actions of the Allies. On March 23 and 24, 1945, British and American troops had advanced across the Rhine by sea and air and were advancing eastwards under massive aerial bombardment. Within a few days the Allied troops had occupied all of Westphalia. The resistance was limited in many places, so the conquest and occupation of the cities usually took place without major fighting. The German defense system, the 'Westfalenwall', had hardly any effect, as it consisted of disconnected, unorganized anti-tank trenches, roadblocks and bases. In addition, the German troops were demoralized and tired of war and longed for an end to the hopeless acts of war. The loyalty that the Nazi regime could rely on for a long time waned and became a cornerstone of National Socialist rule. Until mid-April 1945, the 'Ruhrkessel' was tightened by the US troops until the Second World War was de facto over for the population in Westphalia on April 21st. Almost 40,000 people died in Westphalia as a result of Allied air raids alone.