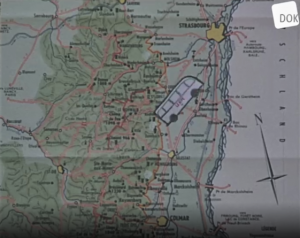 With an animation you can easily follow the route of the group (Foto: LFS)

The nine-minute Super 8 film in color documents the journey of the 'Ulmer Knabenmusik' (UKM), a youth orchester from Ulm to Baden-Baden and Alsace in June 1970. The title is an original trick recording and the route is illustrated with a card trick. The group first travels with two buses from Ulm to Baden-Baden for a performance in the concert shell next to the Kurhaus. Here they are still wearing their dark blue jackets and short ties. The filmmaker repeatedly captures original everyday situations, such as detailed shots of the audience or a round of flags with flags of European countries. 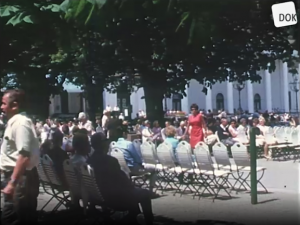 Concert of the music group at the parc in Baden-Baden (Foto: LFS)

From there it goes on to Kehl-Kork, where the young musicians and their companions eat at long tables. From there they drive across the Rhine, on which two barges sail, to the border control, where the papers were still checked at the time. There is also a roundabout with European flags at the border. It goes on to Strasbourg where they give a public concert. Here they are dressed more casually with white shirts with long arms. Further stops on their journey follow: you can see the 'Eric Schultz' winery, the Hohkönigsburg castle complex and another public concert in Mittelwihr. The return journey leads past Freiburg im Breisgau across the Black Forest. 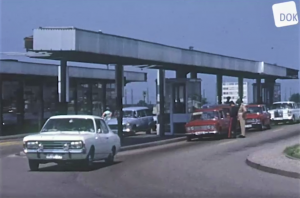 Control at the German French frontier at Kehl (Foto: LFS)

This 'special trip', as it stands at the front of the bus, takes place in the context of the emergence of the European institutions. On March 25, 1957, the Federal Republic of Germany, Belgium, France, Italy, Luxembourg and the Netherlands signed the Treaty of Rome, which enabled the establishment of the European Economic Community (EEC) with a common market and the free movement of people and goods. This was the forerunner of the European Union. In addition, the treaty in the Elysée Palace (January 22, 1963) initiated Franco-German reconciliation. For Charles de Gaulle and Konrad Adenauer, the foundation stone for this reconciliation was laid in active youth work. This contract led to the establishment of the Franco-German Youth Office (DFJW) in July 1963. The aim was to deepen the youth contacts between the two countries in order to arouse interest in the culture of the other country. 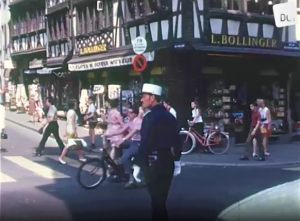 Daily life in the centre of Strasbourg (Foto: LFS)

The Ulmer Knabenmusik (UKM) was founded in 1961 in this pro-European spirit with the support of the city as a wind orchestra to offer active youth work. In June 1970 the young people were in Alsace under the direction of Paul Kühmstedt (1908-1996). The filmmaker, who is not known by name, combines the filmed material with animation sequences. This simple but effective system allowed him to visualize the route of the musical group and gives the audience an orientation. For each city he chooses an emblematic sight such as the Kurhaus in Baden-Baden and the Minster in Strasbourg.

In his film, the filmmaker repeatedly refers to the European idea. He picks up the flags of European countries at various locations in Germany and France. The trip to Alsace illustrates the European importance of the Upper Rhine region and the exchange across the border. In Strasbourg there is a parade with a brass orchestra dressed in traditional costumes from the Austrian Burgenland, which leads from Gutenbergplatz via the Grandes Arcades to Place Kléber. The amateur filmmaker has positioned himself in the middle of the street and lets the music group run towards him. In the background there is an advertising poster with the slogan: "To miss a picture with a Kodak Instamatik camera, you have to do it on purpose." There are close-ups and counter shots of vineyards, decorative storks, Alsatian half-timbered houses, the Hohkönigsburg and two huge Crémant bottles enthroned at the entrance of the Dopff house in Riquewihr. These are important elements for the filmmaker just as the everyday situations and people he records are typical of Alsace.

Organized trips abroad became very popular in the Federal Republic after 1945. They developed further with the diplomatic advances of the European Treaties, which granted freedoms within the member states. These organized trips were mainly carried out by bus, which the filmmaker often focuses on in his recordings. You can see them on the departures and arrivals of the music group or on excursions to Alsace. Since the coaches were also filmed while they were in motion, the filmmaker was probably traveling in his own car. The film serves to document this European moment in the history of the Musikverein for the future. Isn't the journey of Ulm Boys' Music even aimed at promoting the spirit of reconciliation through the discovery of the neighboring French country?