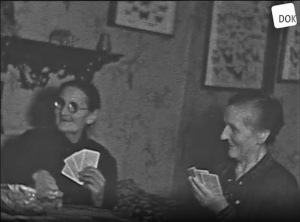 he five-minute silent film in black and white was recorded in 8mm amateur format. It shows a rather unusual Christmas party in Ettenheim in 1938. The couple seem to have no children and instead invited two older women who may be related. First the three women play cards; in the middle of the table is a crystal pastry bowl. You have a lot of fun with it or at least stage the happiness in front of the camera. The scene is lit, but a little underexposed overall. Indoor shots were a challenge for private filmmakers because the footage wasn't very sensitive to light. Additional light had to be provided accordingly, which should illuminate the room as evenly as possible and not just create islands of light. The camera pans slowly from right to left and is probably on a tripod because the picture itself is pretty stable. In the background hangs a decorated wooden board, on which other bowls and trinkets from the household are placed, and on the right three frames of collected butterflies. After the first minute, a German shepherd comes into the picture from the left, which also gets a place. For the next one he has to shake hands and perform other tricks. He always calls for new cookies with his bark. When he stands on his hind legs, he disappears from the picture. When the ladies resume playing cards, he lies down next to the table, satisfied. Finally, the filmmaker himself comes into the picture, lights a short cigar and participates in the game. He gets up again, checks the camera and then sits down at the table again. 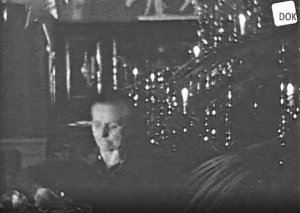 The decorated Christmas tree has caught on everywhere (Foto: LFS)

The full table of gifts as an image should not be missing (Foto: LFS)

In the next shot, the three women are sitting next to the Christmas tree and eggnog is being poured. The filmmaker comes up and lights a cigarette. A poinsettia hangs above them and in the background there is a porcelain figure with a horse. The Christmas tree is decorated with candles and tinsel. Everyone toasted at the camera. Then the dance of the three women begins in the living room. In the background you can see a chest of drawers with a photo frame and an elaborate ceramic stove with a white female figure. The German shepherd comes into play again, the wife takes him by the front paws and dances a few steps with him. After a short fade-in you can see another couple turning in waltz beat. The camera now follows the movement and is no longer fixed on a tripod. In the background you can see a showcase with other treasures such as chandeliers and porcelain plates. In the next sequence there is a pan over the table of gifts with a crystal bowl on a silver plate, a vase and food and drink. Then the dancing couple can be seen again in front of the Christmas tree and then you sit together and let the evening end happily. In the final shot, there is a visit from a family with children lighting a sparkler. The film shows that Christmas is always a festival where you can meet up with family and friends. 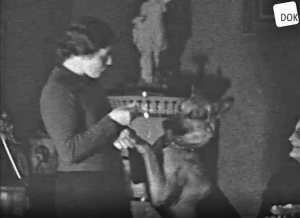 The German Shepherd is allowed to celebrate with the family (Foto: LFS)