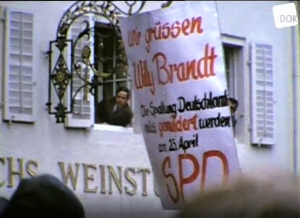 The almost three-minute, silent Super 8 film shows Federal Chancellor Willy Brandt's campaign appearance on Freiburg's Münsterplatz. In doing so, he supports the Socialdemocratic party (SPD) in Baden-Württemberg in its state election campaign. Willy Brandt can be seen together with the Mayor of Freiburg Dr. Eugen Keidel (SPD) under the arcades of the historic department store. Before Brandt's speech, the amateur filmmaker shows the assembled people with open umbrellas in a long shot from behind and zooms in on the empty balcony. His speech is twisted out of the crowd and partly out of focus. An SPD banner is hung on a house “We greet Willy Brandt. The division in Germany must be alleviated. On April 23, SPD ”. But opponents are also present, such as the poster “Already been there! Hitler-Stalin treaties were murder treaties! ”. It equates the Eastern Treaties with the 'Hitler-Stalin Pact'. In this non-aggression pact between Nazi Germany and the Soviet Union, Stalin assured that would not stand by Poland in the event of a German attack. A poster criticizes the reforms of the social democratic economics and finance minister Karl August Fritz Schiller, who tried to prevent the impending economic crisis after years of boom. At the end, Brandt greets again from the balcony of the historic department store and the film shows the participants from all parts of the population as they leave Münsterplatz. 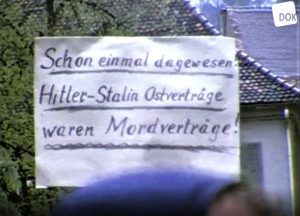 The social democrat Willy Brandt, who was the ruling mayor of Berlin from 1957 to 1966, stood for a new social liberal beginning after decades of conservative dominance by the CDU / CSU - also known as the Adenauer era. Brandt was Vice Chancellor and Foreign Minister in the grand coalition under Federal Chancellor Kurt Georg Kiesinger (CDU). In the first social-liberal coalition in 1969, he was elected Chancellor. “We want to dare more democracy” was the key message of his first government statement. The most important topic was the new policy with Easteurope, with which Brandt reacted to the east-west division of the world and the Cold War era. A central goal of Brandt and his Foreign Minister Walter Scheel (FDP) was a clear relaxation in relation to the GDR and the other states of the Warsaw Pact, a military assistance pact of Eastern European countries under the leadership of the Soviet Union. 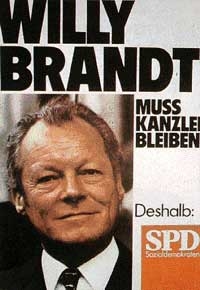 Before the Warsaw Treaty was signed between Poland and the Federal Republic of Germany, Willy Brandt knelt in the former Warsaw ghetto at the monument to the heroes. The picture went around the world in 1970. The Chancellor always denied that this gesture was a deliberate staging. In any case, it fitted in with Brandt's new orientation in east policy under the motto “Change through rapprochement”. In 1971 Willy Brandt was awarded the Nobel Peace Prize in Oslo for his policy. In the Federal Republic of Germany, the Warsaw Treaty with the de facto recognition of the Oder-Neisse border and the end of the "sole representation right", i.e. the right to speak for all Germans, including residents of the GDR, as well as the Nobel Peace Prize, became very critical of political opponents seen and vilified Brandt as a traitor to German interests.

In 1972, about half a year after the award, there were tensions within the government and between government, parliament and finally the transfer of SPD and FDP members to the Union due to the Eastern Treaties, which changed the majority in the Parlament. The then opposition leader of the Union, Rainer Barzel, saw his chance and, for the first time in the history of the Federal Republic, resorted to the parliamentary means of a constructive vote of no confidence. However, Rainer Barzel surprisingly lost the vote because of two votes within the CDU / CSU parliamentary group that were bought by the GDR government. However, since Willy Brandt no longer had a majority in the Bundestag either, he subsequently put the vote of confidence in consultation with the opposition, which was planned to be lost. Federal Chancellor Brandt then recommended Federal President Gustav Heinemann that the Bundestag be dissolved. New elections were called for November 19, 1972.

The SPD designed an election campaign that was tailored entirely to Brandt, the “Chancellor of Confidence”. With the slogan “Choose Willy” the person Willy Brandt should be put in the foreground, but basically this election of November 1972 was about the vote on the future of his easter policy, in which the SPD/FDP on the one hand and CDU/CSU on the other fundamentally faced. The early federal elections were an opportunity for the CDU/CSU to stop this policy. Willy Brandt regularly mobilized the masses during his election campaign appearances. His fame was based on his 'election campaigns' for the federal elections of 1961 and 1965 as the leading candidate of the SPD against Adenauer and Erhard, his resolute stance as the governing mayor of Berlin against the building of the Wall and his good relationship with the American President John F Kennedy, who war very popular in Germany. The national election on November 19, 1972, won the SPD with its candidate Willy Brandt with a record result and a record voter turnout of 91.1%.