Title: 14.7.35 / At Feldsee / Family at Feldsee: bathing in the lake, girls catching small fish, boxing match with shoes; Girl on meadow; Lettering in the sand 'Gresgen / 18.8.35'; Hike in the Wiesental (district of Lörrach); Swimming pool on the Rhine; Girl at coffee table; Outdoor pool; Monastery building <not identified>; Girl with goat and on jetty; Hike with a rest at the edge of the forest. //

The black-and-white film, shot in 16 mm format, deals with various family excursions by the Freiburg architect and private filmmaker Curt Balke in the summer of 1935. You can see his wife Käthe and daughter Kati, who was 15 years old at the time, as well as his other family. 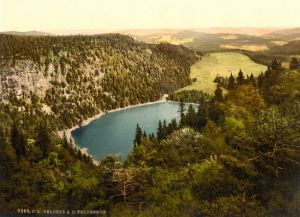 The Feldsee was an attraction in the 19th century (Photo: Library Congress)

Letters placed on a blanket inform that the recordings at Feldsee were taken on Sunday, July 14, 1935. The Feldsee in the Black Forest is 32 meters deep and the basin was created by glaciers during the Ice Age. The body of water, originally called Feldbergsee, lies at 1,113 meters above sea level in a basin surrounded by steep, steep slopes and dark fir trees (Schnars 1876, p. 117). In contrast to the time the film was recorded, the Feldsee is now a nature reserve and bathing is prohibited. The family picnic on the lake shore, swimming and paddling in the water is shown. The dog pulls a log out of the water. The youngsters catch fish in a can. Curt Balke, then 52 years old, boxed for fun with another man, with his shoes serving as boxing gloves. Boxing was promoted under National Socialism and introduced as a school subject (Klipfel 2020). The 1936 victory of German boxing world champion Max Schmeling over Joe Luis was instrumentalized by Nazi propaganda. The two girls romp in a meadow, doing headstands and flips. 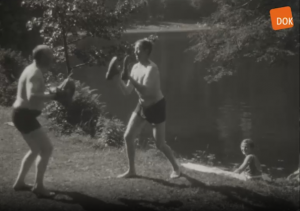 On August 18, 1935, the family went on a trip to the southern Black Forest, as can be seen from the word Gresgen written in the sand. This place in the Zeller Bergland was first mentioned in a document in 1113 and is a state-approved resort. The Balke family goes on a hike in the Wiesental, accompanied by another family. You take a break at the pentagonal 'Gresger Türmli', which was built as a refuge in bad weather and heavy snowfall. It is located on the top of the Rümmelsbühl and offers a panoramic view of the Swiss Alps, the Hotzenwald, the Vosges and the Black Forest (Merkle 2014, p. 135). The tower is being preserved today by the Gresgen Association for Improvement. One shot shows a meadow valley bordered on the left and right by a dense fir forest.

To cool off on the hot summer day, the Balke family visits a river swimming pool in the Rhine, which is mainly made of wood with a steel frame. The two girls swim in the Rhine. You can clearly see the flow of the river in the pool. Once Balke runs the film backwards and the girls jump out of the pool back to the starting position. As the cities grew, bathing, separated by sex, became increasingly popular in the 19th century. In the Weil am Rhein region, there are two remaining Rhine baths: the Rheinbad St. Johann and the Rheinbad Breite.

In the next sequence, daughter Kati Balke receives three friends in chic, summery dresses who sit at a garden table outdoors and chat over coffee and cake. Then the family visits an open-air swimming pool, presumably in Lörrach, and there Balke uses the technical trick of running the film backwards. So the jump off the board is reversed. The girls are doing gymnastic exercises on the meadow again. A visit to Friedenweiler Palace is then on the Sunday program. The castle, founded in 1123 as a Benedictine monastery, is now a senior citizens' residence. Between 1922 and 1983 there was a children's sanatorium in the building (Hermann 2018). The film shows a group of girls between the ages of five and ten cleaning their shoes or petting a goat. This is followed by shots of another hike and a rest on a meadow near a lake - possibly the Windgfallweiher or the Nonnenmattweiher - where they picnic, read a book together and the children do gymnastics and splash around in a stream. At the end, the hiking group is shown on the way down the Karl-Egon-Weg with a view towards the Feldsee.

The b / w silent film about hiking and bathing in the southern Black Forest, which was shot evenly and without blurring, suggests the use of a film camera with a spring mechanism, which did not require cranking and which, due to a short focal length, had a depth of field of 1.5 Meters to infinity. Film recordings could be made free-hand, at a constant speed. A camera like the 'Kinamo S 10' from the Dresden company Zeiss Ikon cost 250 Reichsmarks. The cine projector for showing the finished films cost 340 Reichsmarks. A cassette with 10 meters of reversal film, which corresponds to just under a minute, cost 10 Reichsmarks (Klipfel 2020). Therefore, even in the 1930s, amateur film was an expensive hobby that not everyone could afford.