As part of the 850th anniversary of the city of Freiburg im Breisgau and under the motto "Freiburg - City of Wine", a wine festival was held at Münsterplatz for the first time. This is still done today. It takes place annually in July and is one of the largest wine festivals in Baden and the surrounding area. The film for the 1970 wine festival was shot by the amateur filmmaker Helmut Eckert in 16 mm; it is part of his film documenting the 850th anniversary celebrations of Freiburg. 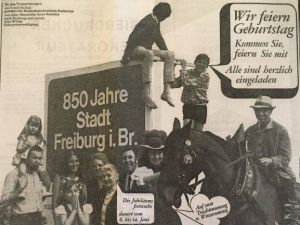 Promotion for the city anniversary and the wine festival (Stadtarchiv Freiburg)

This film mainly shows the moving to the opening ceremony, the opening ceremony itself, and the dance and drink afterwards. The focus here is on the participants who are important for the wine festival. Mostly it was shot in a half-close or half-long shot. Helmut Eckert worked with a lot of montage to include as much important details as possible. The former wine village took place from June 12th to 16th, 1970 and was completed with a winegrower's move (LFS 2297_7). The city of Freiburg had the idea of ​​bringing together the Baden winegrowers' cooperatives, those interested in wine and winegrowers. In the preliminary discussions with the Baden Winegrowers' Association, President Emil Klaus emphasized that he would only support the organization of the wine festival with a wine village and a parada. He also asked organizers of the Markgräflerland and the Kaiserstuhl to forego their own events at this time so that the wine festival in Freiburg could become a central attraction. From him came the suggestions to open the wine village on Friday, to hold a winemaker procession on Sunday and to have a morning drink on Monday morning. A large wine village with tents, snack stands and dance podiums was built around the Münsterplatz. The location was deliberately chosen because the cathedral and the market square are centrally located. The archbishop was initially against planning because the service could be disrupted. However, he was assured that this was avoidable since the wine festival started at 2 p.m. on Sunday. The traditional weekly market was held on the Münsterplatz between the vine arches on Saturday. The Breisach central cellar had the largest wine stand. There were a total of 16 vine arbors and a champagne stand on Münsterplatz. The winemakers from the Markgräflerland stood on the south side, the Kaiserstuhl region on the north side, the Ortenau and stands of Freiburg on the west side. All types of Baden wines were offered, from table to top-quality wine. During the opening hours until 11 p.m., dance and entertainment bands and accordion clubs played on the two dance stages.

On Friday, June 12, the party was held at 5 p.m. by Mayor Dr. Eugen Keidel officially opened. Previously, the mayor and the acting Baden wine queen Gerda Moser from Neuweier were picked up at 4.30 p.m. in a decorated "Landauer" carriage at the Rathausplatz in Freiburg and taken with a small opening train along the "Weinstrasse" to the department store on the Münsterplatz, which in the film is only briefly documented. The Baden wine princesses Bärbel Fischer from Waldulm and Antonia Wössner from Riegel drove ahead in horse-drawn carriages. The 'Kaiserstühler Herolds' from Ihringen accompanied the train musically, the fanfare train consisted of about 20 people and took 1 1/2 hours through Freiburg. The mayor's opening speech took place on the balcony of the old department store in front of around 5,000 spectators. Unfortunately, the sound of the film concentrate on music and original sound and it was to complicated to record the spreeches. The Südwestrundfunk broadcast the opening ceremony live from 4:33 p.m. to 5:33 p.m. In his speech, Eugen Keidel emphasized that Freiburg is not built on a wine cellar, but "where Lukull resides, Bacchus is not far away". In doing so, he draws on the meaning of the god Bacchus. This is considered the Roman god of wine, ecstasy and fertility and spread the art of viticulture. A wine variety from Müller-Thurgau, Silvaner and Riesling has been named after Bacchus since 1972. With a big sip of red wine and the words "Long live Freiburg and the wine" he then opened the wine village. The Baden wine queen Gerda Moser followed with the words: "Freiburg has remained young - it should be in the future too". Freiburg wine merchants presented their wine assortments in the courtyard of the department store. Following the opening ceremony, the anniversary sparkling wine, which was provided by department stores, was served at sparkling wine stands; additional beer stands offered an alternative. During the wine festival there was also a "squat on the wine market" in the courtyard of the regional council, where tastings from the Breisach central cellar could be tried. After the opening ceremony, celebrations continued in the 'Alte Burse' and in the courtyard of the department store. The musical accompaniment was provided by an accordion club and a lady who sang about the history of Baden wine and who is unfortunately asynchronous in the film.