Skiing in the Black Forest

The 2 ½ minute silent black and white short film in 16mm format, shot by the private filmmaker Curt Balke from Freiburg, shows winter sports in the southern Black Forest in early 1938. You can see both amateur and professional athletes doing cross-country skiing, downhill skiing and ski jumping as well as tobogganing and riding a horse-drawn sleigh. Balke is a committed skier himself and often travels with his family in the Black Forest, which he documents in some of his films (see e.g. the films "Wintersport Freiburg", "Wintersport Bodensee", "Ausflug Oberstdorf"). This film shows two events that took place as part of the German Wehrmacht Ski Championships in 1938 (Lasotta 1938, p. 1). On the one hand there is the alpine competitions located on Feldberg (downhill skiing) and on the other hand the Nordic combination (ski jumping and cross-country skiing) taking place in Neustadt. 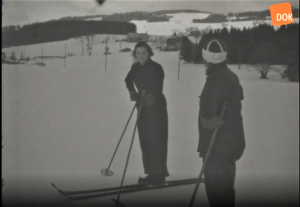 Kati Balke on a skiing tour in the Black Forest (Foto: LFS)

The beginning of the film shows the family doing winter sports and winter impressions (cross-country skiing, downhill skiing, tobogganing, horse-drawn sleigh rides) on the plateau between Hinterzarten and the Feldberg. The Balkes drive to the Feldberg in their Mercedes. The mountainous landscape is recorded from the moving car. The German and Wehrmacht ski championships from February 5 to 13, 1938 contributed to the image enhancement of the ski region (Lasotta 1938, p. 1). The following sequences show the downhill race for women and men on February 5, 1938 at Fahler Loch, which is known for its steep slope. The racetrack is lined with numerous spectators who cheer the skiers and are documented by Balke from various positions. It also shows the viewers sunbathing. 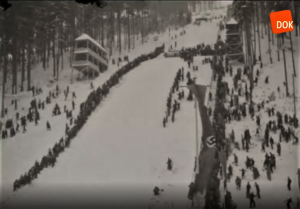 Ski jumping from the landing area in Neustadt (Foto: LFS)

The program of the Wehrmacht Ski Championships shows that the combined ski jumping event at the Hochfirstschanze in Neustadt took place on Saturday, February 12th at 2.30 p.m. Balke starts shooting down at the landing area and then climbs up the jump. This enables him to turn from different perspectives. The audience was able to experience the ski jumpers up close (Hitz 2011, p. 28). The jump tower allowed the referees to see the entire jump, which is decorated with swastika flags. At 6 p.m. the award ceremony was held on Rathausplatz in Neustadt, which is no longer documented in the film.

The history of winter sports in Central Europe begins around 1880 (Vetter 1968, p. 294). Skiing was initially a leisure activity of the upper class. Skis were used in the Black Forest for professional purposes by midwives, country doctors or postmen. For students and academics, physical exercise was the main focus (Herzog 2005, p. 11). In February 1891, the French diplomat Dr. R. Pilet ski sports on the Feldberg. Then the Todtnau Ski Club was founded in 1892, followed by the Freiburg Ski Club in 1895 and the Academic Ski Club there in 1903 (von Savigny 2003) (see film "Ski-Fest 1908"). The early ski pioneers came mainly from Freiburg and Basel. The Höllentalbahn from Freiburg to Hinterzarten, opened in 1887, made it possible to travel to the Feldberg, which led to the popularization of winter sports there. 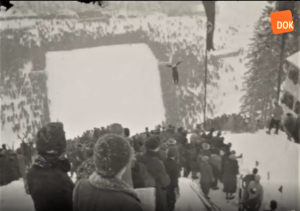 Ski jumping from above (Foto: LFS)

In 1930 the construction of the first Hochfirstschanze began with the K-point 60 meters in Schmiedsbachtal of the Munich ski jumping hill planner Carl Luther. It is the largest natural hill in Europe. It is based on its geographical location and that means that it has not been changed by construction work either in the approach area (diving tower) or in the landing area (slope) (Herbner 1995, pp. 300-304). The jump was prepared by the jumpers of the organizing team. There was no in-run track, it was a jumper's job to draw the first track. Back then, ski jumping was more athletic because it worked in physically demanding jobs and was only active as a part-time ski jumper (Ski Jumping World Cup Titisee-Neustadt 2013, p. 24 f.). In 1950, today's plastic covered jump was built next to the previous ski jump, which was rebuilt again in 2000 to be suitable for the World Cup. The original ski jump was used until around 1970 and then demolished.

In the autumn of 1938, the billeting of soldiers began in the region. Funds for housing and municipal infrastructure were cut in favor of armaments investments. During the Second World War, tourism stalled due to the lack of foreign guests. An official permit was mandatory to stay on the Feldberg (Vetter 1968, p. 349). After the end of the Second World War, the Black Forest could no longer tie in with the Alpine nations of France, Switzerland and Austria, which made the Nordic discipline the dominant competitive sport again. From 1946 onwards, French occupation troops built ski lifts on the Feldberg. Today winter sports are one of the most popular and most widespread sports, despite direct and deep interventions in nature. Like hardly any other sport, it had a social and landscape-defining impact on a cultural area in the mountains. Remote mountain villages became centers of tourism and venues for international competitions (Herzog 2005, p. 12). City dwellers in particular went on vacation in the Black Forest, which stimulated the local gastronomy and hotel industry.