At first glance, the short film looks unspectacular. A swivel shows a meadow with beer benches, where young soldiers sit and frontally look into the camera or zuprosten her. In the background you can see an empty marquee, also stocked with beer benches. Other scenes show the soldiers getting closer to drinking beer, smoking cigarettes and enjoying the sunny day. A new section marches into the square, accompanied by a boy with a scooter. A table is staffed with officers. The beer tent fills up and a military band has taken a seat. A long shot shows the space now filled with civilians from above. The maneuver ball can begin. The film is related to the return of the military to Offenburg in 1936, which belonged to the demilitarized zone after the First World War. 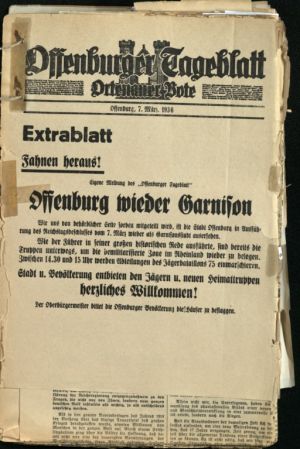 ] For the entry of the soldiers, the Offenburger Tagblatt published an extra page on 7.3.1936 (Akten Stadtarchiv Offenburg 5_6380)

== == Rhineland occupation The remilitarization of the Rhineland was called "Rhineland Liberation" in Nazi propaganda. This was the one-sided occupation of the previously demilitarized Rhineland by the German Wehrmacht on 7 March 1936. This represented an open breach of the Treaty of Versailles, which wanted to expand Hitler's military position. The unanimous acceptance of the invasion by Britain and France strengthened its position. Offenburg was also affected by the military operation. Even before the invasion, Mayor Wolfram Rombach went to Berlin several times for secret negotiations. On March 7, 1936 in the afternoon - coinciding with the occupation of the Rhineland - the battalion of the 75th Infantry Regiment 75 from Villingen moved into the likewise demilitarized Offenburg. A few hours earlier an extra sheet of the Offenburger Tageblatt had been published. In it they demanded the population on "flags out!" And reported that Offenburg after 1898 now again garrison city, i. military associations were permanently housed there again. "The cheers of the population knew no bounds," wrote the daily paper, referring to a large crowd of citizens lining the streets.

After moving in, Lord Mayor Rombach gave a speech at the barracks court, in which he welcomed the soldiers: "They should find a home with us.". Afterwards, people cheered the Germany and Horst Wessel songs with joy. The 75 hunters occupied the barracks in Weingartenstraße. The following Sunday, the barracks for visitors was once again open. This especially pleased curious children and adolescents. The March 10 newspaper once again reported on the hunters and the "really cordial relationship" between soldiers and citizens. The battalion band played its first course concert. 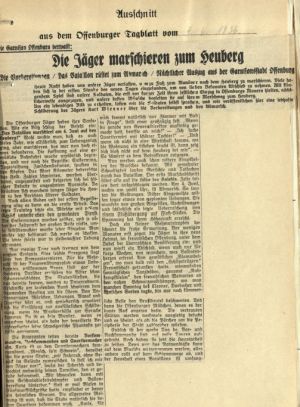 Even before the 'occupation of the Rhineland' was worked in Offenburg on secret national purposes. The aim was to re-centralize and remilitarize the German police. However, as this violated the Treaty of Versailles, the plans had to remain secret. The buildings 11 and 12 of the Offenburg barracks were selected as possible accommodation for the state police forces. In 1935 they were rebuilt in a very short time, the barracks newly paved, emergency shelters and horse stables built. At the end of May, the state authority withdrew the permit. Finally, in 1936, the barracks were selected as the headquarters for the 75th Jager Battalion with 10 officers, 745 men and 80 horses. Commander Major Drekmann had already settled the housing issue before moving in. The soldiers should practice warfare, machine gun and shooting during their stay. The evacuation and repair of construction 9 was also arranged for the 75 hunters; the whole cost the city almost 300,000 Reichsmark. The fleet and the horses were housed in the municipal construction yard as well as in stables in the city. Major Drekmann noted that new buildings were required. Above all, it lacks stables, carts and riding tracks.

Fichier:Letter Jäger Offenburg.jpg
The Officers Corps of the Jägerbataillon thanks the Lord Mayor and the population for the reception and the wine donation after returning from the maneuver (Akten Stadtarchiv Offenburg 5_6380)

On the night of June 4, 1936, the Jäger Battalion marched on a 25-hour hike to the maneuver on the Heuberg. The training area Heuberg is located in the district Sigmaringen / Zollernalb. He has been in use since 1910 until today. In the edition of the Offenburger Tageblatt of 4 June 1936, the hunter Kurt Wiesner reported on the preparations: "For the